Gridlock in the City

As it so often happens, life has as way of clarifying whether or not you are making the right choices.

So it happened on Tuesday evening when I drove my parents to the airport.

They live in the sleepy little coastal community of Gibsons, BC.  A lovely place indeed, as long as you never need to A) go there or, B) leave there.  That necessitates a trip on BC Ferries, which is an idyllic 45 minute mini-cruise through the picturesque fjords of Howe Sound.  Sounds lovely, doesn't it?  And it is, minus the expense,  the mind-numbing lineups of traffic at both ends, the overpriced and underwhelming food choices on board and the general inconvenience of having to travel at a scheduled time other than what is convenient for YOU.

So it was on Tuesday that my parents needed to leave Gibsons in order to get to Vancouver Airport to fly to Prince George, BC to visit my sister and her family.  Their choices of transport modes were limited from the ferry to the airport, and none of them really worked.  None of the ferry sailings coincided very well with the WestJet flight times.  The coach from Gibsons would get them to the airport 4 hours before their flight, which meant a long wait and a long day.  The transit bus would be difficult for a couple in their late 80's juggling canes, luggage and a laptop, and necessitate quite a lot of walking.

So, to the rescue was I - offering to pick them up at the ferry terminal and drive them to the airport.  Across the city.  At rush hour.  Since I rarely have to deal with the fray that is Vancouver traffic (except for our little commute from work to home which is all of 10 minutes) I manage to convince myself every time that it won't be that bad.  A bit like childbirth.

And it's always much worse that I expected, a bit like childbirth.

I picked them up at 4:30 for their 7:30 flight and the plan was to drive to the airport, park and once they were checked in for their flight we would grab dinner together.

We stopped at a gas station first for Dad to get a bottle of water.  Mom said "hurry Jimmy, don't be long" and I said "Mom we have hours!" Oh, I was still so optimistic at that point!  We crawled over the Lion's Gate bridge, telling each other it would be better once the four lanes had merged into two.  We crawled through the causeway telling each other it would thin out downtown.  When I saw the gridlock that was Georgia St, we turned and went through the West End.  Very slowly, I might add.  Along Beach Ave we were practically parked, but with the motor running.  As a lone cyclist whizzed by in the new cycling lane that used to be for cars, I tried to visualize Mom and Dad on bikes of their own, and simply couldn't, it was too big a stretch.  But we'd get to the airport faster with bikes at this rate.  This stop and go (mostly stop) continued all the way to the airport. 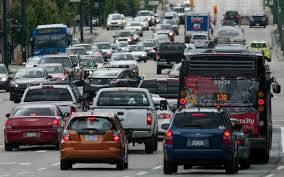 ﻿
Vancouver has the dubious distinction of the worst traffic gridlock in Canada.
﻿
On Granville St. Dad piped up with "I wonder how our lives would have been different had we bought a house we looked at just off Granville St back when you were a kid?  Instead, we bought the farm in Langley."

It was clear when we arrived  at the airport that there was no time for dinner together.  It was well after 6 already and they still needed to check in for their flight.  So, we agreed to part at the departures drop off area, I put their luggage on a cart for them and we said our goodbye's.  It was disappointing for all of us, as we have seen less of each other than usual with the busy-ness of buying the county estate  and selling our city house.

I headed off for home.  At a snail's pace with the traffic still at the peak of snarl.   A stroke of brilliance prompted me to stop at a grocery store along the way to get the groceries I had planned to get at the store close to home.  Why do that?  I could do my shopping now, let the traffic calm down, then drive home under more pleasurable circumstances.

The grocery stop took about 40 minutes, longer than normal since the store was completely unfamiliar and I had to keep retracing my steps looking for things I needed.  Oh well, more time for the traffic to subside.  I pushed the buggy out to the car at about 7pm, feeling my stomach growl at the smell of the hot BBQ chicken I had bought for dinner.  If I ever got home.

I unloaded the groceries and before I slammed the back gate on my SUV, I impulsively broke open the chicken package and yanked off a leg.  A huge bite later, I stood happily munching chicken in the Superstore parking lot, with chicken grease running down my chin, and no napkin. 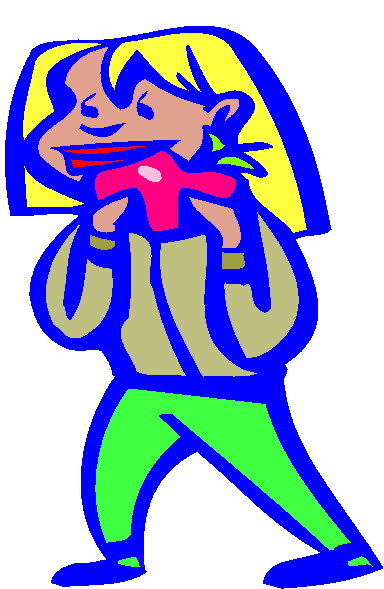 Hmm, with greasy hands I opened the car door and rummaged in the door pocket triumphantly emerging with a scrunched and pre-used Kleenex - that was all that I could find.  It was very inadequate.  Later I realized there was a roll of paper towel in the back, so I was able to clean up, grabbed an apple from my shopping bag and headed off in the much reduced traffic of the evening.

Driving home I thought about the convenience to the Abbotsford airport from the country estate, and the several routes to get us there - through country roads flanked by farmers fields, nary a traffic jam in sight (except Abbotsford Airshow weekend!) and realized that the decision to move where roads are wide, population is light and parking lots are half empty is a great one!