It's no joke, this life transformation is hard slogging sometimes.

Even with the addition of Bogey into our life (love, love!) it is not always easy to stay positive when our life seems like a bit of a train wreck. We are virtually camping in our little factory during the week, and working our asses off each and every weekend at the country estate.  And progress is slow.

Most days, I am weathering the storm.  I don't have to look very far to find folks in far worse circumstances than ours.  And ours is of our own making, so boo hoo to us.  And eventually it will all be done, and we will be moved in full time.

I know I have neglected the blog. I guess I feel like my blog should be upbeat and full of positivity all the blooming time, when lately, I gotta say, I have been feeling anything but upbeat and positive.  But today, I can see some humour and a few things you might find interesting.  So here we go:

At the shop we sleep on a futon which is the size of a double bed.  It's extremely small for two people who exceed 6 feet in height with corresponding widths!  At first, it was one of my biggest beefs - `the bed in the shop is too small``  I would lament to anyone who would listen.  I now realize that when we get home to the big king sized bed that is soooo comfy-- it seems huge!   I am always freezing in it since my Chuckles is miles away on his side and I don`t benefit from the lovely heat he radiates that I have become very accustomed to during the week sleeping on the futon!  In order to cosy up to him, I squirm my way over towards the center of the bed - and encounter the hump created by the two box springs underneath the mattress!  Hmmm maybe we need to downsize back to queen size when we move in full time.

It`s astonishing how simply one can live.  During the week we have a microwave, an electric skillet, a toaster oven,  a slow cooker and a single burner propane stove (rarely used.) 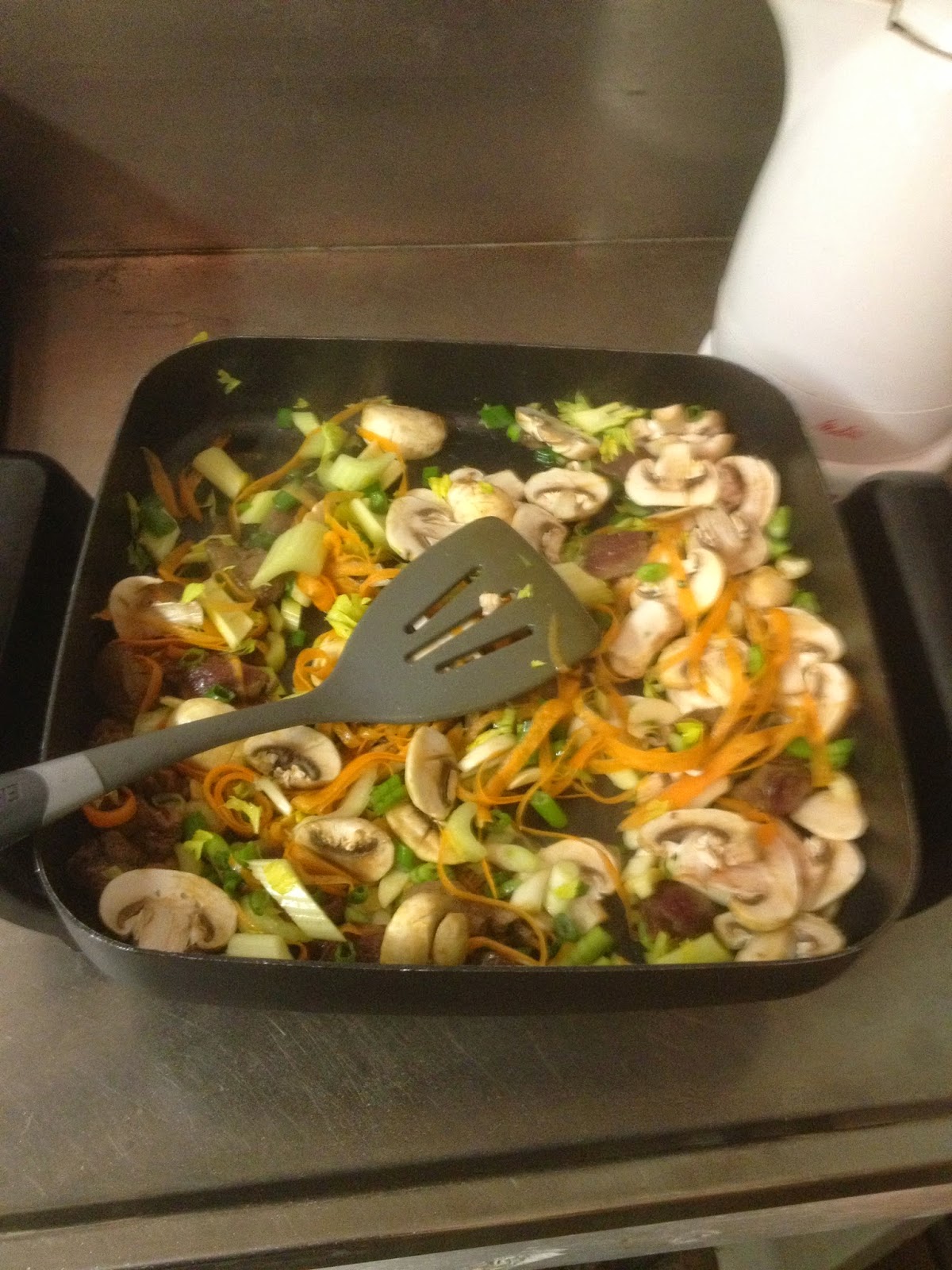 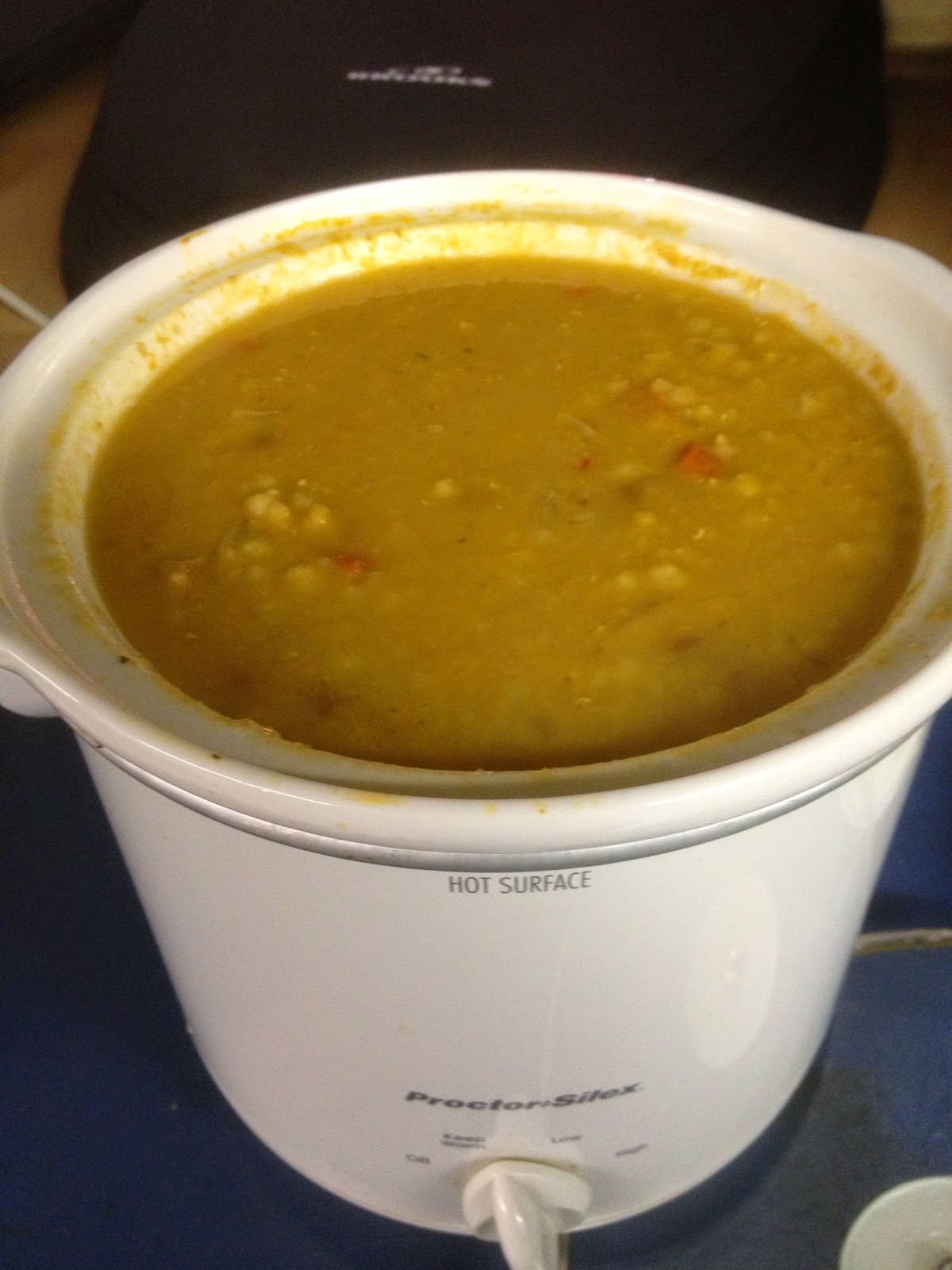 Pictures of delicious meals prepared in our minimalistic weekday kitchen!

We have 3 full size plates, several small ones, a few mugs, a minimal amount of cutlery, and a three glass baking dishes of varying sizes, of which we use two often and one rarely.  We eat amazingly well, and I use the slow cooker most of all.  I make soups, pasta sauce, chili, and various other concoctions such as the one today which is cut up chicken breast, with rice, mushrooms, onions, red pepper, peas and carrots and a can of cream of celery soup and some broth thrown in along with two whole dried chili peppers.  Add a side salad, and there is enough for dinner tonight and lunch tomorrow.  We cook rice and pasta in the microwave.  Being campers no doubt helps, this is like deluxe camping I suppose!

Our clothing choices for the week are made in about 3 minutes flat at home once all the laundry is done.  Two pairs of jeans, three shirts, and a couple of sweaters or sweatshirts does it for me.  They all go in a plastic bin at work so I just pull off the top.  I`ve never been a fashion maven, but this is simplicity itself.  It`s brilliant really.

It has also been great getting Bogey before we moved to the country full-time.  In the city it has been imperative to expose him to traffic, and teach him rules of engagement with people and other dogs.  At the country estate, he runs amok on the property and if we took him only there, he would never have learned to walk nicely on a leash, come when called, the various hand signals he now knows or manners around other people.  Not saying he`s perfect, by the way, but he is learning!

Since I blogged last, we have poured the concrete aprons on either side of the barn and last weekend we pulled the roof off, as we are changing out the roof for a trussed style with a steeper peak to accommodate a room upstairs.  (The man cave, as I understand it!)

When I arrived with Bogey at the country estate, there were two ducks absolutely sound asleep beside the pond.  I drove up, crunching across the gravel driveway, and they still had their heads tucked firmly under their wings.  I do mean SOUND ASLEEP.  They likely had been using our pond all week long with no interruptions, so they were not guarded at all.  When they finally woke up, shook their heads, and stared at me, it was with a `who the hell are you`expression on their faces.  All weekend long they managed to co-habitate with Bogey and the other dogs.  A couple of times a day we would hear them honking and see them fly off, then we`d know that Bogey had decided he felt like a swim.  But they would return when he was finished! 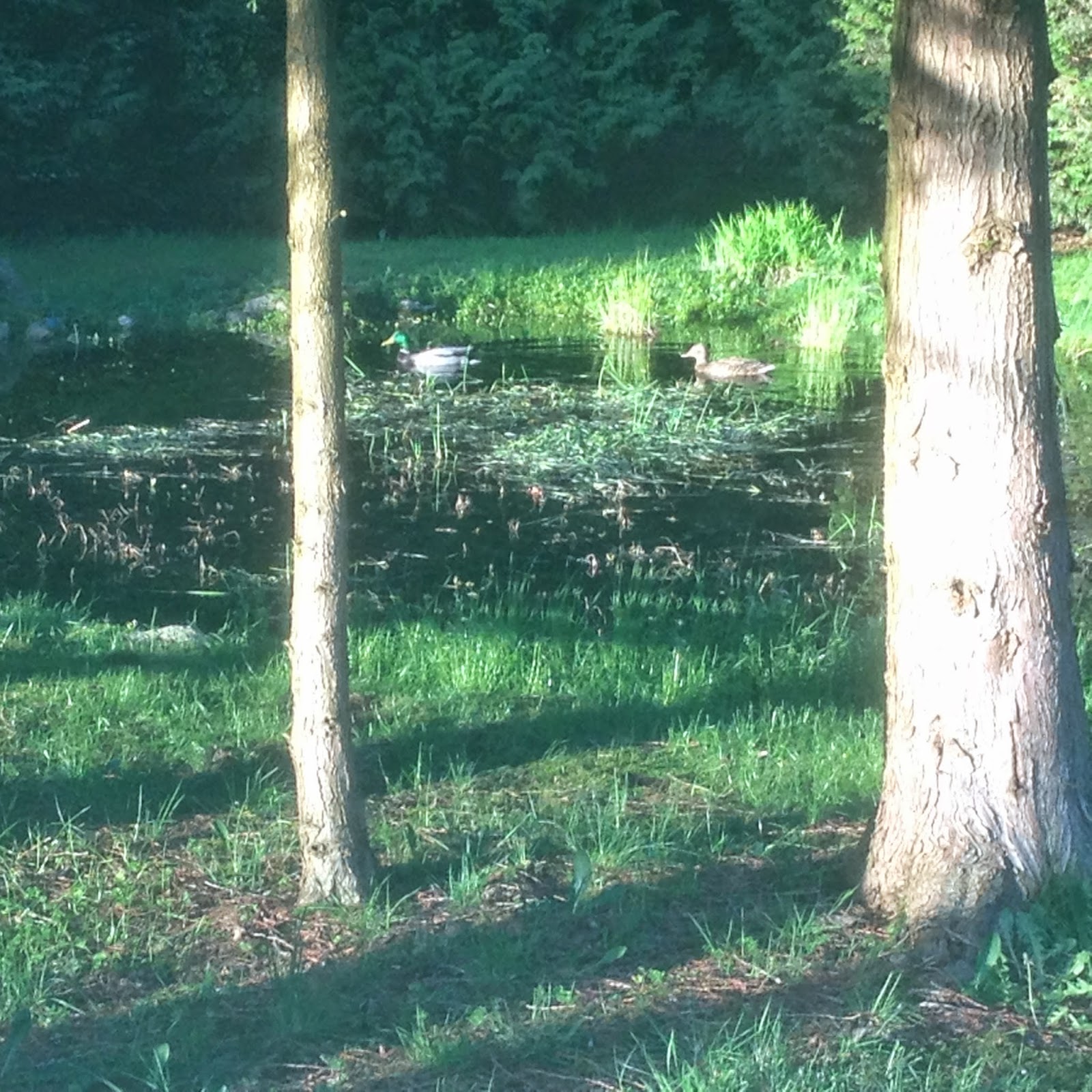 The ducks at home on the pond, between Bogey`s swims

Easter weekend is traditionally our first camping trip of the season, and I was bummed out that we were home working (again) with no other plans for the weekend.  So it was a fantastic surprise when young son and his girlfriend showed up from the island.  Together with Chuckles and older son, and some friends who showed up to help we got that whole roof taken off and the mess cleaned up.  That was a big job and very satisfying to see it behind us! 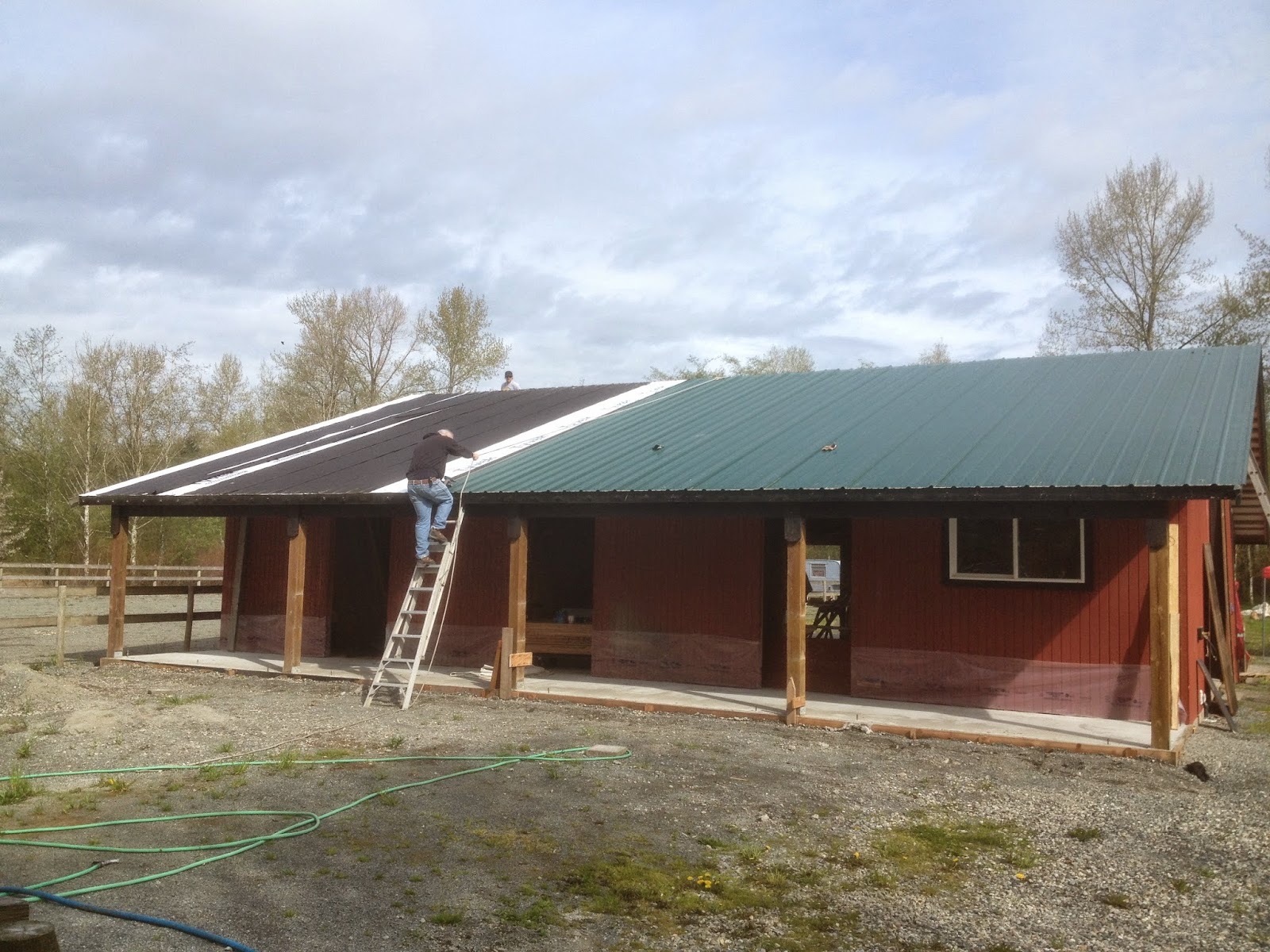 Above and below, the roof comes off! 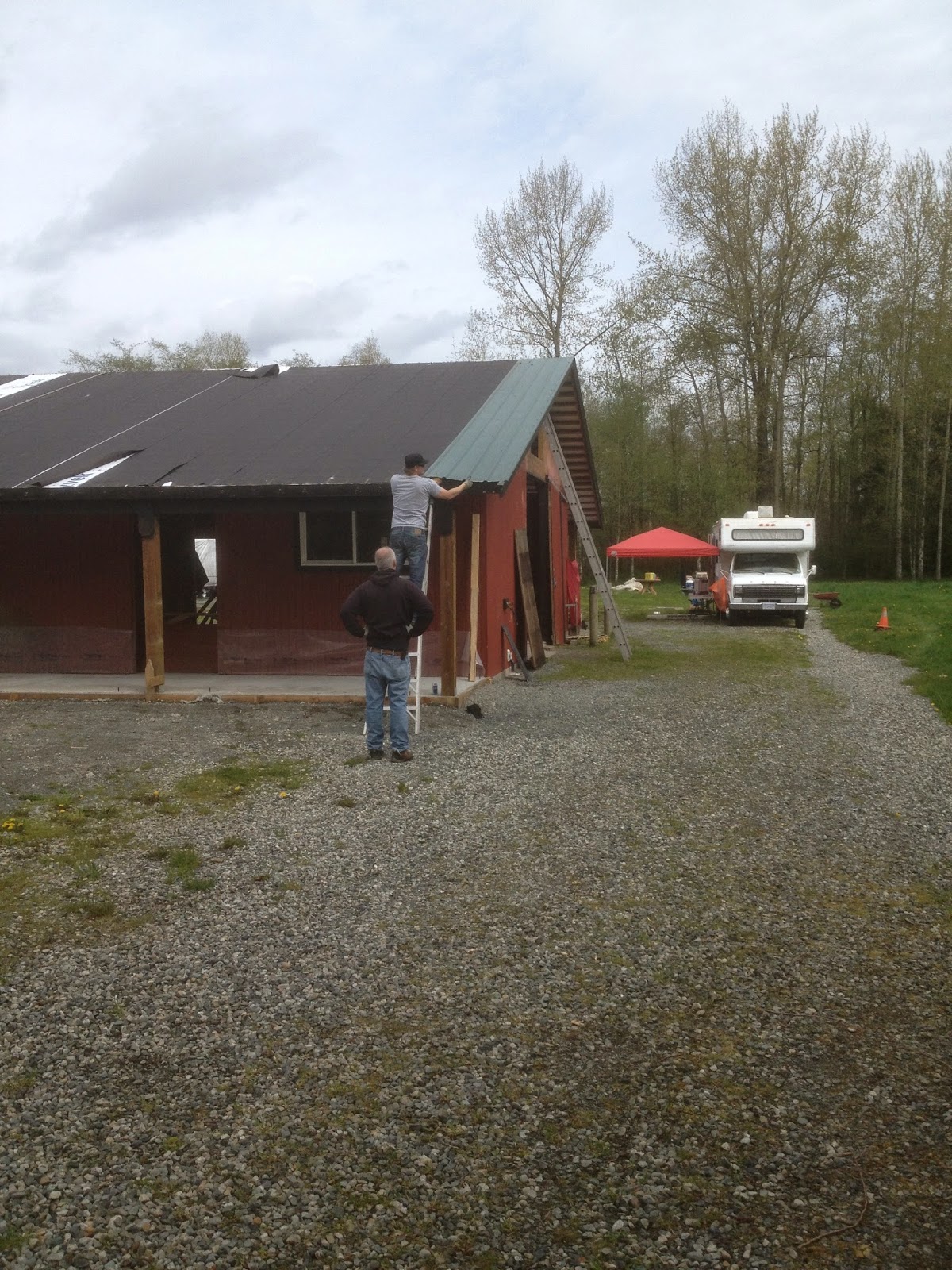 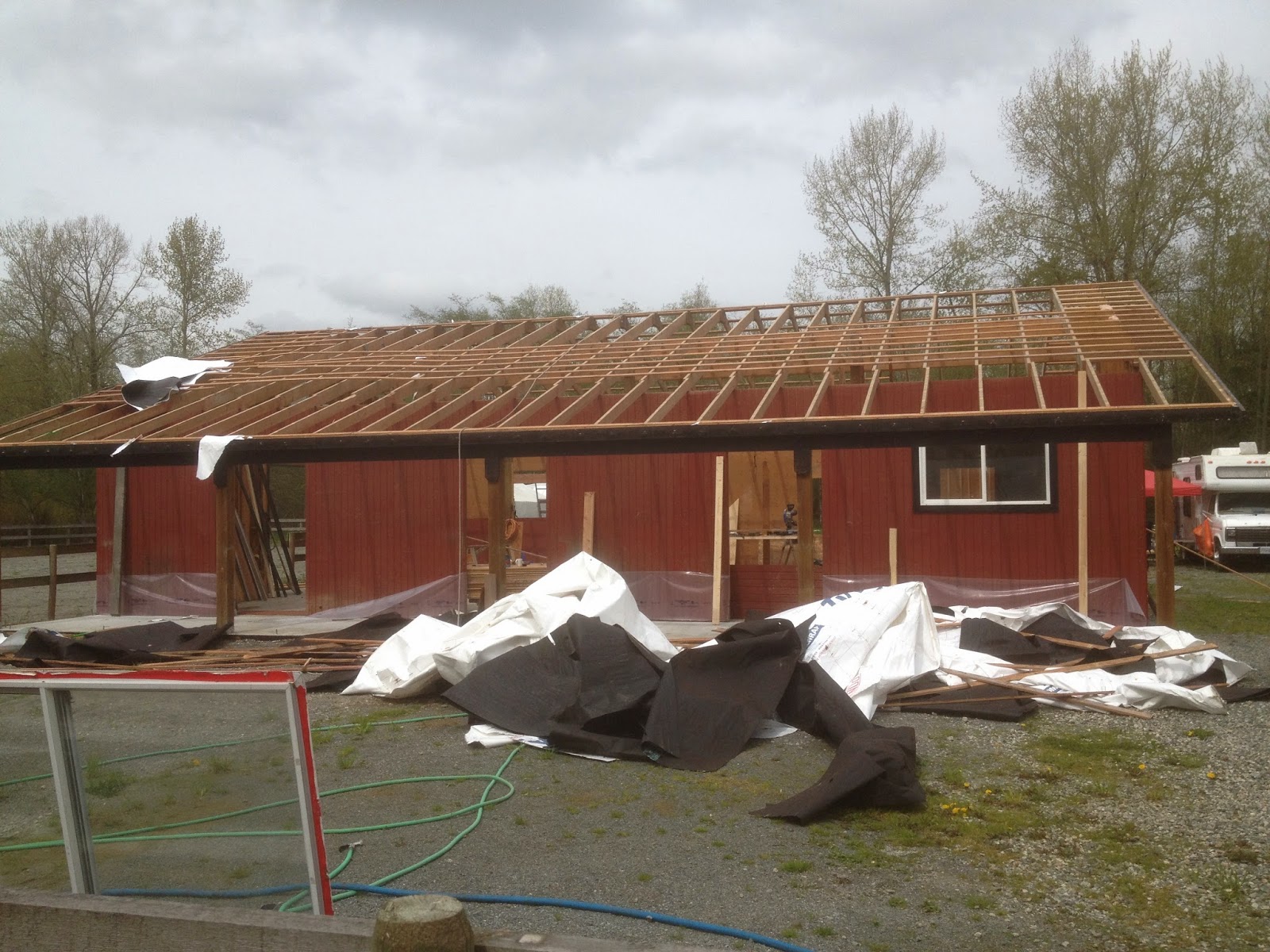 Roofing material off, lots of mess to cleanup! 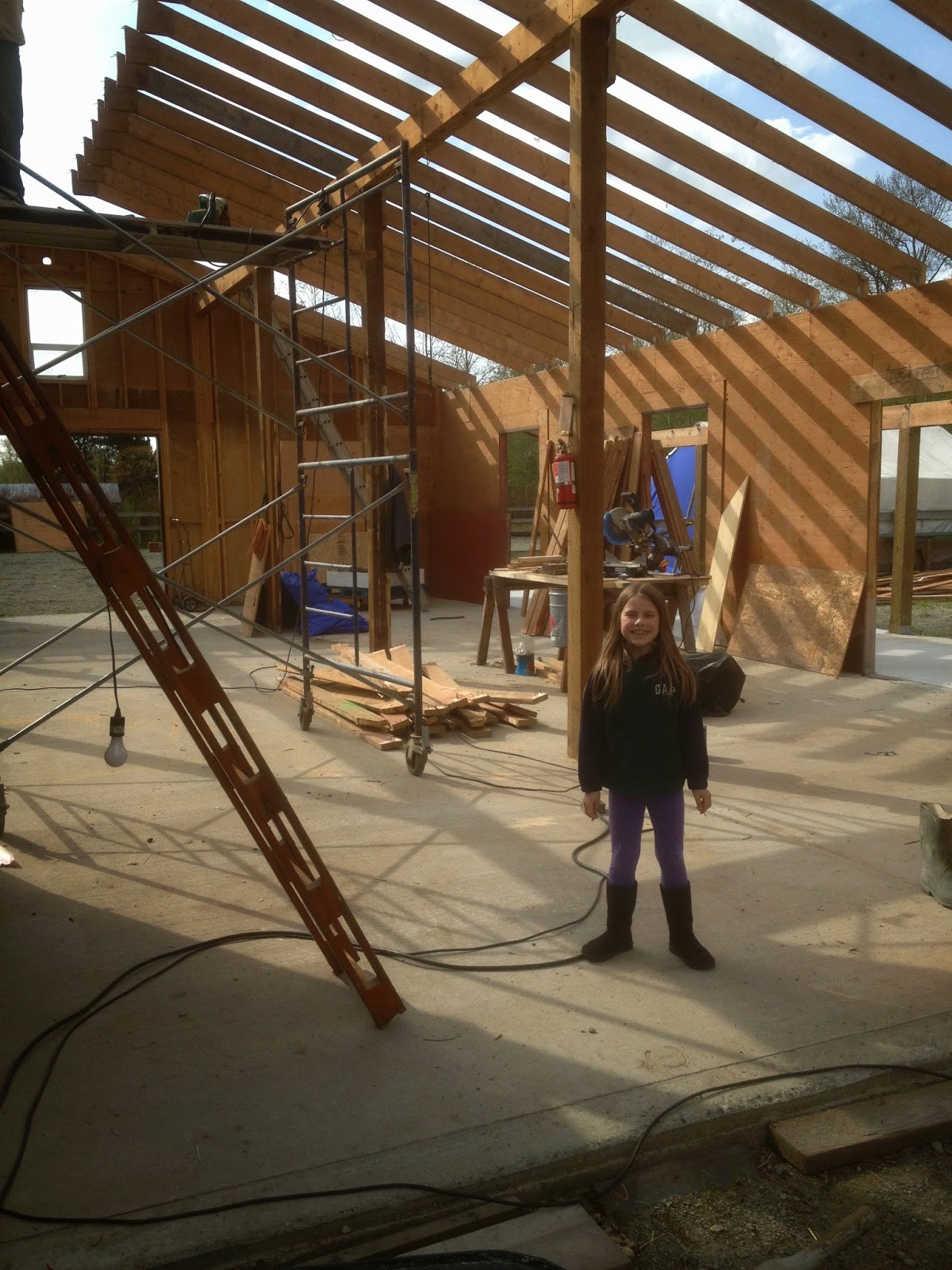 Above the roofless barn viewed from inside
and below, our friends daughter pitched in and worked hard at the cleanup 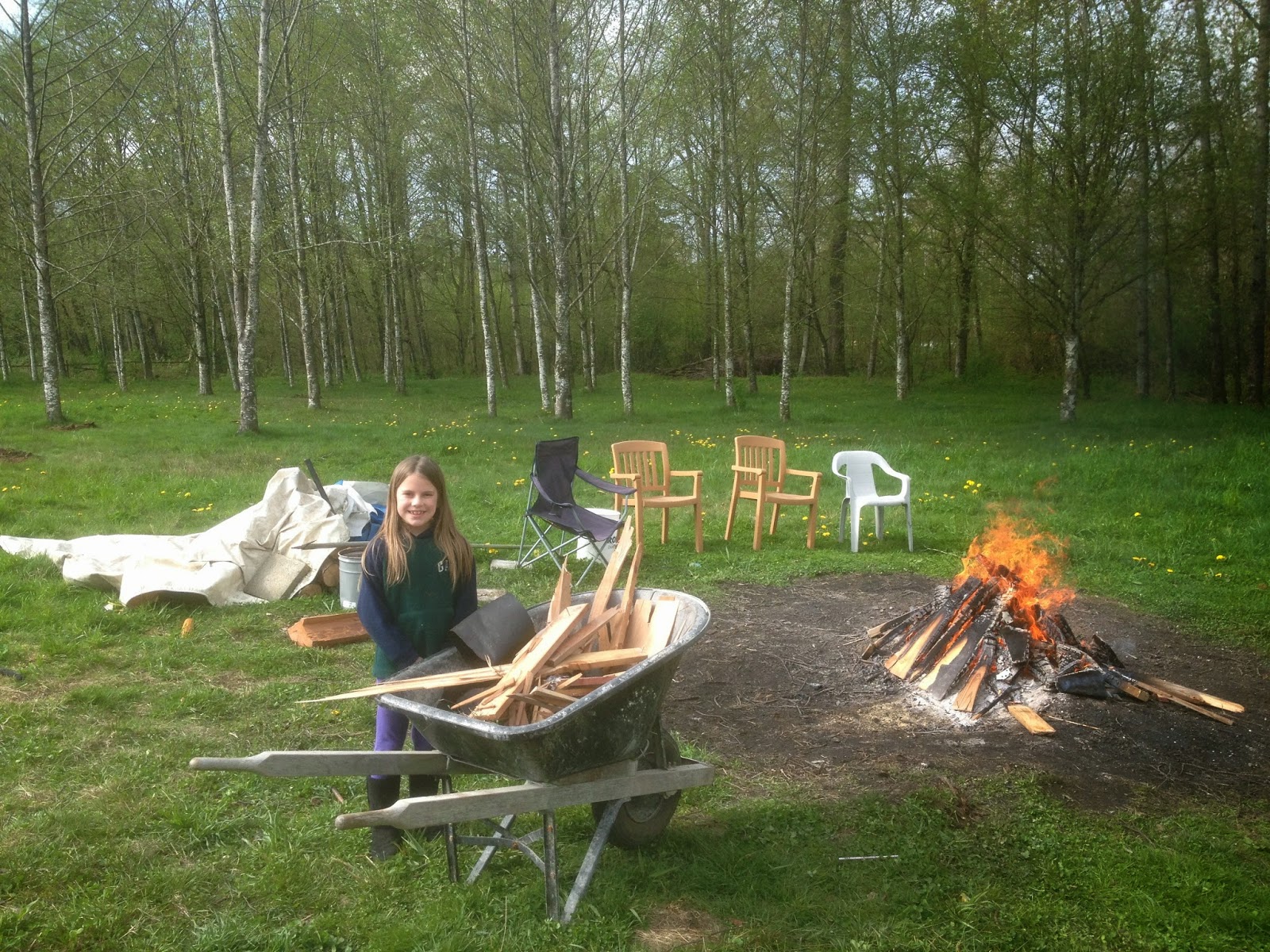 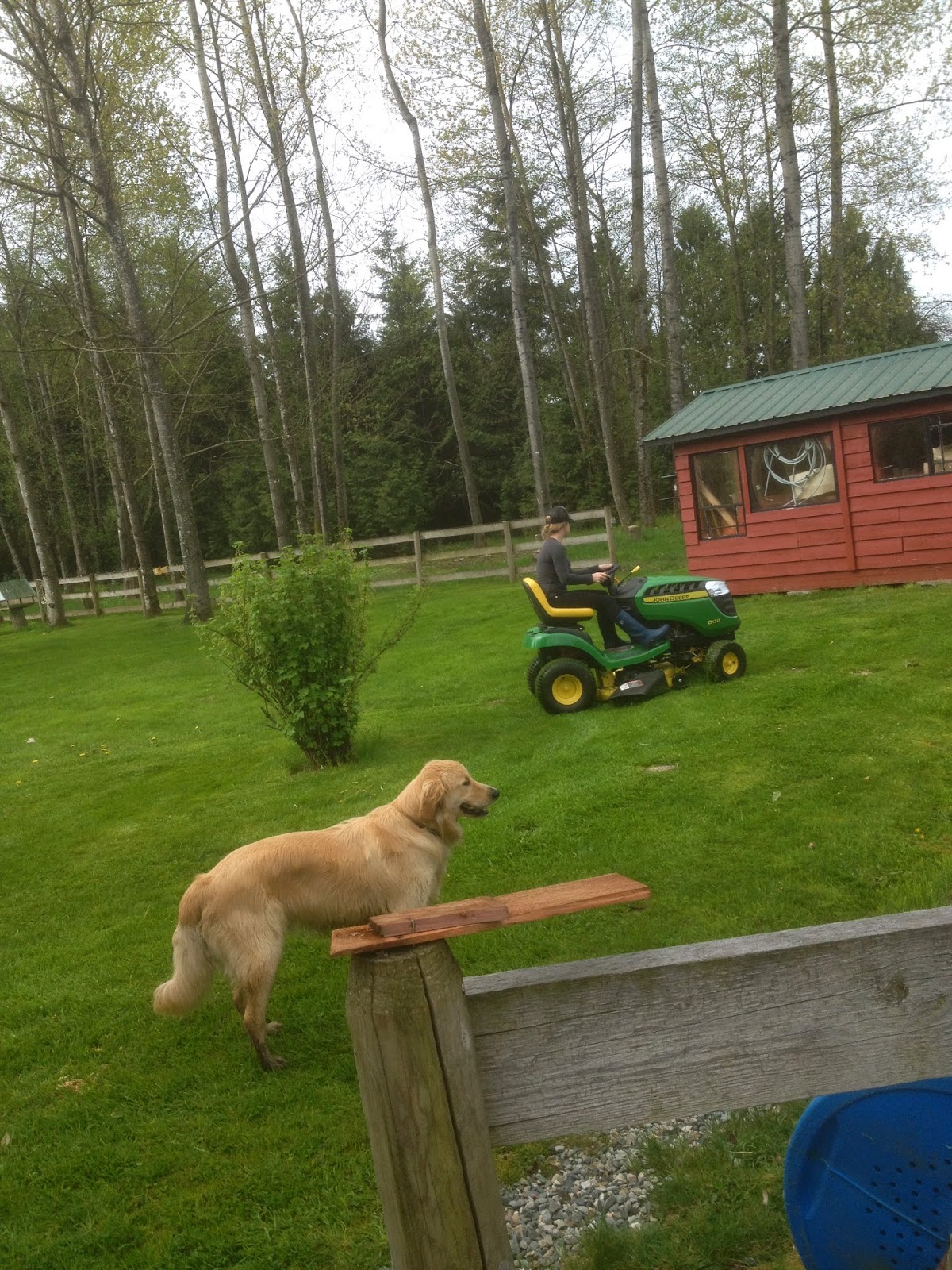 My son`s girlfriend mowed the lawn with the ride-on lawnmower, supervised by Bogey

We also had an impromptu bonfire and barbeque with the kids and their partners and dogs,  which was a lot of fun and stress free.  Another example of how simple life can be.  No planning, no stress, they just showed up, we pooled our food resources, lit the barbeque and had an amazing family Easter. 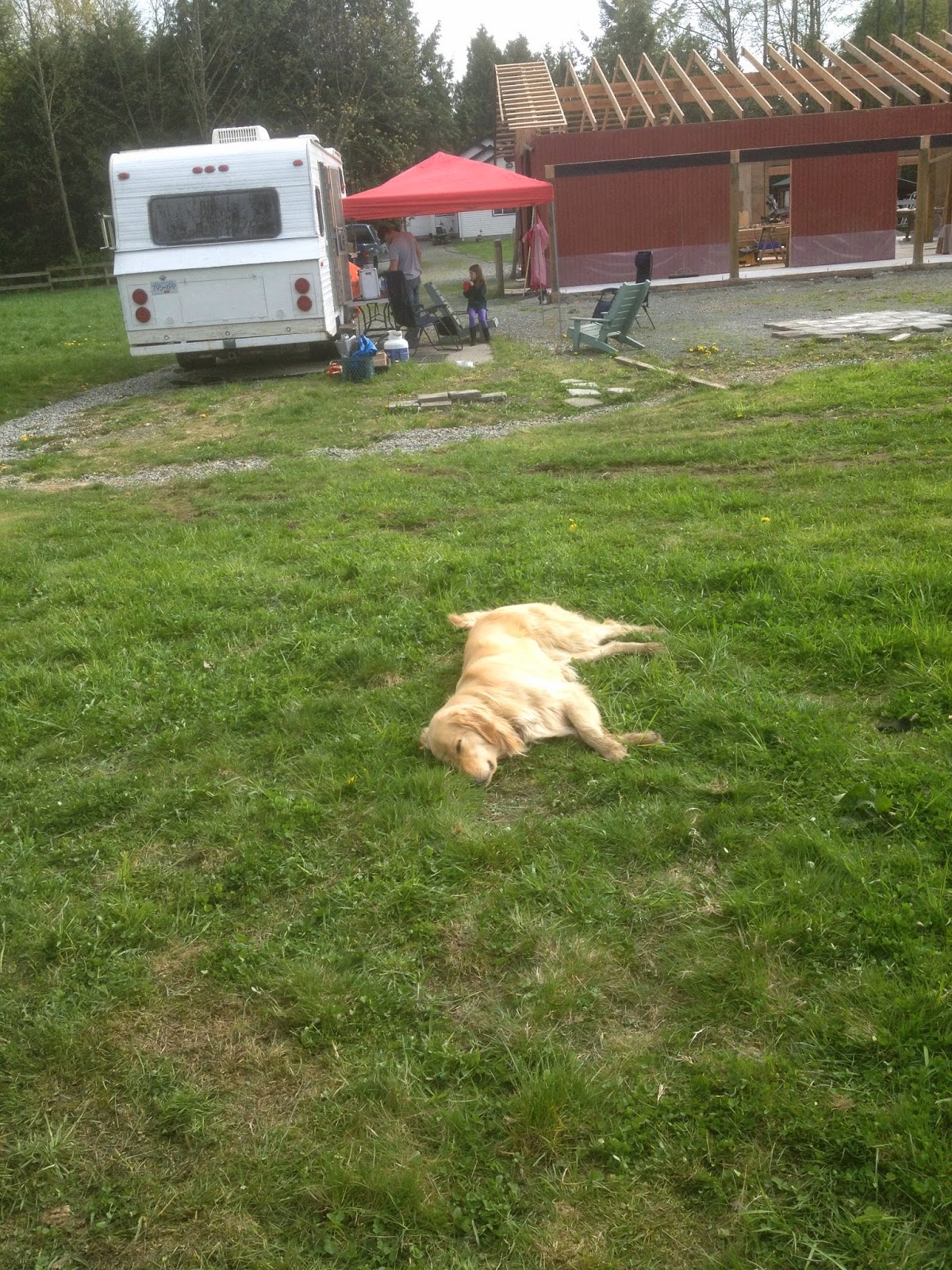 Bogey couldn`t keep his eyes open any longer by Monday afternoon!
A friend posted on Facebook the other day a verse that seems appropriate to both the barn project as well as life in general:
For a seed to achieve its greatest expression, it must come completely undone.  The shell cracks, its insides come out, and everything changes.  To someone who doesn`t understand growth, it would look like complete destruction.  Cynthia Ocelli.

My garden is taking shape!  I now have lettuce, peas, onions, garlic, parsnips, beets and carrots on the go.  I have dug up two small beds so far, side by side, each one has been a lot of work.  Stripping off the grass and roots, then digging out 6-8 inches of clay below, adding in 6`8 inches of composted manure, all by hand, me and my wheelbarrow, with a little unwelcome help from Bogey.  He sees me digging and thinks it`s a fun game! 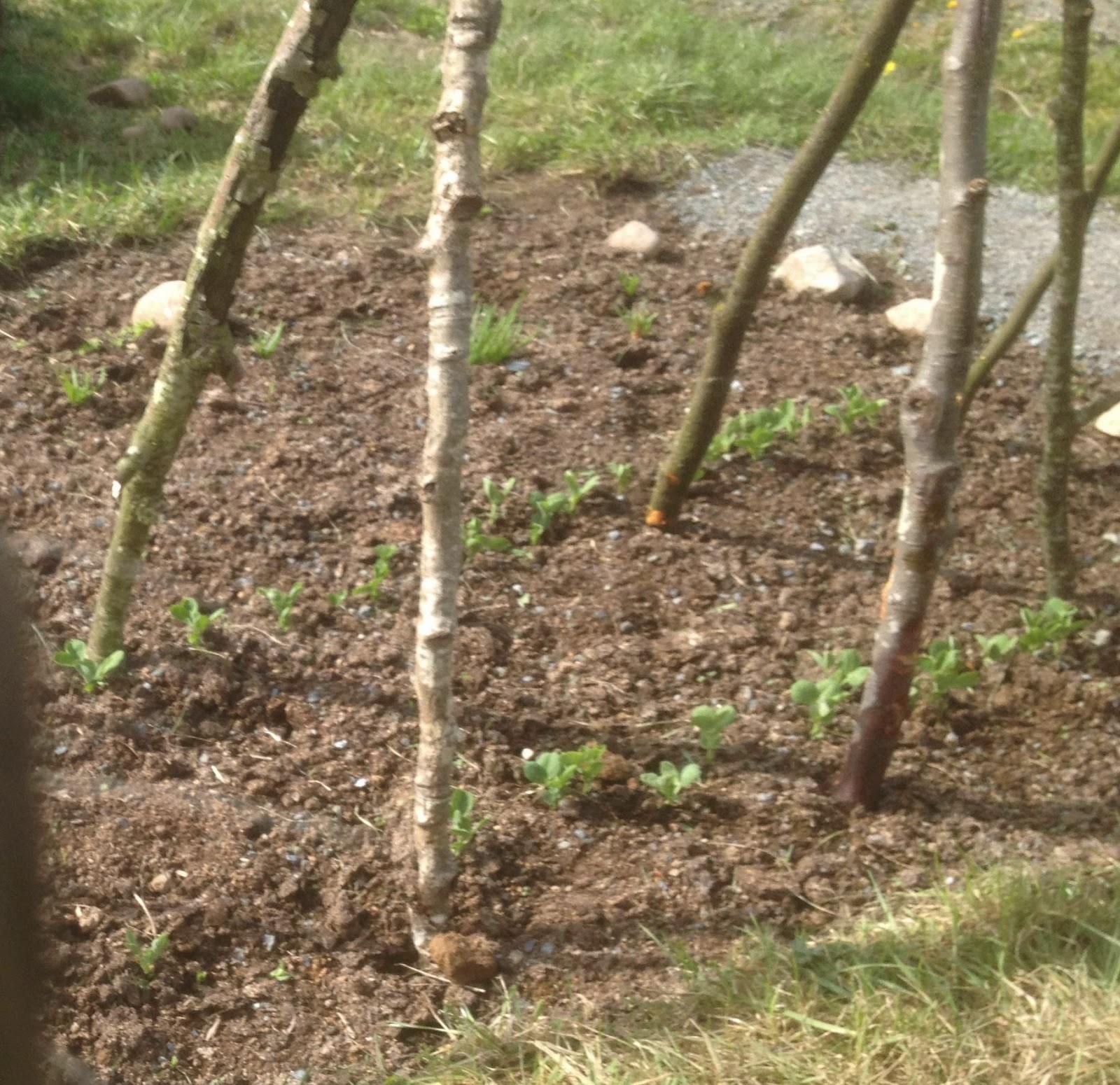 Although friends have a bobcat they offered to bring over so I could prep the whole garden area at once, I have decided keeping it small for this summer makes sense.  With only being there on weekends, and the water shut off to the barn until the reno is complete, it would be hard to weed and water a large garden this season, so small is manageable.

That`s it for now, I am making a renewed commitment to the blogging, be it happy news or simple desperation, you are getting it all from this point forward!