Jacob, the golden retriever-on-loan and I spent last weekend together at the country estate while Chuckles was away on a hunting trip.  We enjoyed a visit from some friends from Quadra Island who were in town to see a show with their daughter and her husband.  All four made the drive to the country to check out our new place and have a visit.  They also have a small manufacturing business which they relocated from Kelowna to Quadra Island seven years ago.  When I feel overwhelmed by our move, I only have to think of the logistics they had to face and it puts our venture into perspective.

I am enjoying the continuing crop of raspberries that are still producing just enough for a handful for a munch or to put on my cereal in the morning.  I expect that will now be over as we have had some rain, but it has been a sweet treat. 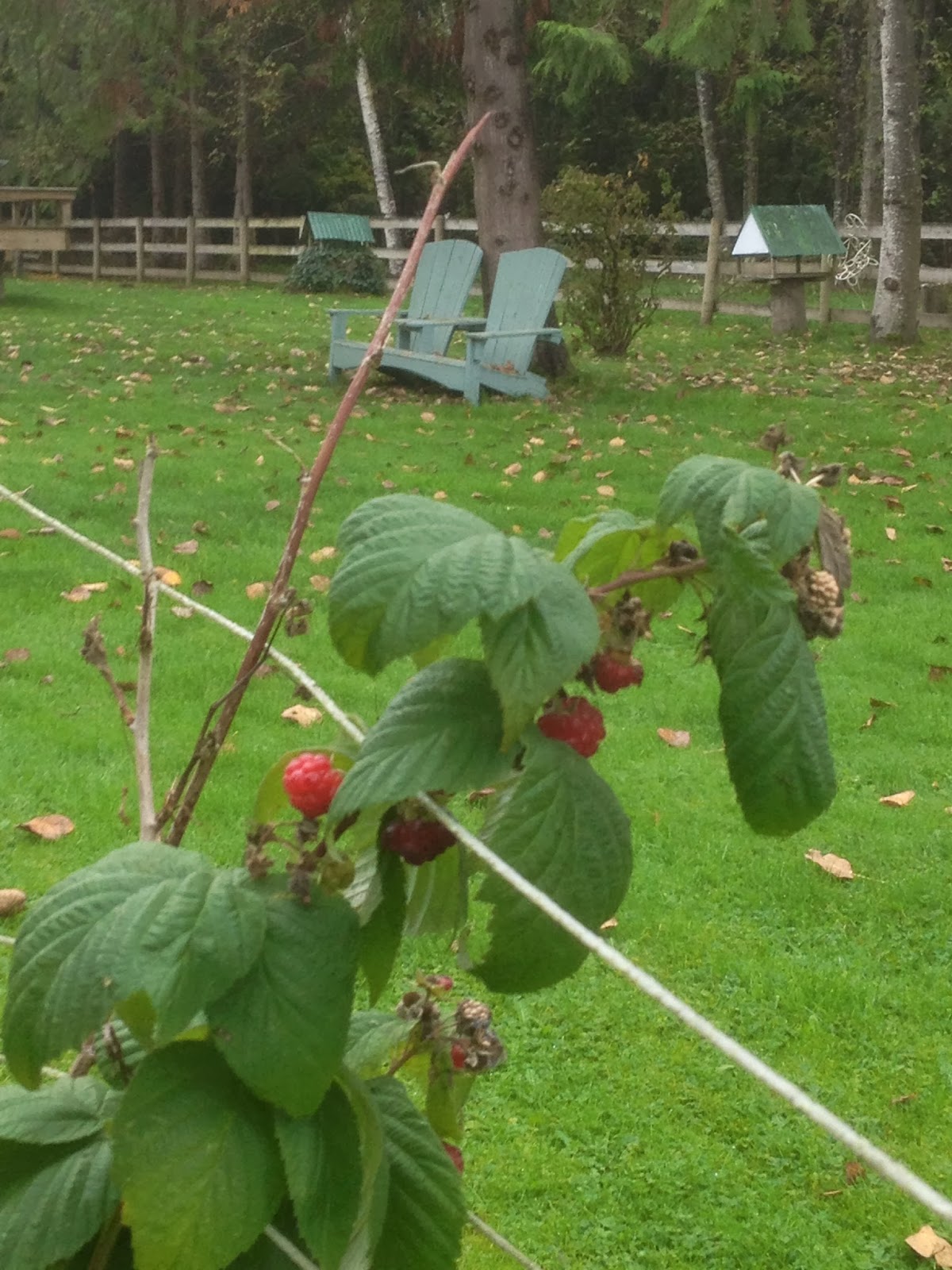 Still some raspberries ripening - enough to put on your cereal in the morning!
Another of the fall pleasures at the country estate is the low flying flocks of migrating geese that whiz by in formation early mornings and early evenings.  You hear them before you see them, with their cacophony of honking.  I can’t help myself, if I am in the house, I run outside so that I can be underneath them as they fly over.  They are often so low, that I can see their legs tucked up close to their bodies, and their noise is so loud it’s quite thrilling.  If it’s early in the morning when I am still in bed, and they fly directly over the house, I can see them through the skylight above the bed.  This season my choir is singing “My Favorite Things” from The Sound of Music and one line is “wild geese that fly with the moon on their wing, these are a few of my favorite things”.   I get it.  They’re one of my favorite things, too!


And of course nothing is more therapeutic to me than being in the garden.  Gardening and choir practice go well together   -    I put in my earbuds and sing, dig, prune, water and weed to my heart’s content!  At the country estate there is some “buffer zone” between me and the neighbors.  In the city, I would suddenly realize I was in the backyard belting out my music, probably driving all the neighbors nuts!
So with my earbuds in and Jacob nearby,  I tackled pruning a large, overgrown rosebush and another shrub at the side of the house.  I am not a fan of prickly plants, so I have never really been one for roses, but I also have a hard time "doing-in" a plant,  so the rose bushes around the place have been given a reprieve.  But I swear if I get too many more pokes and scratches, they could be goners! 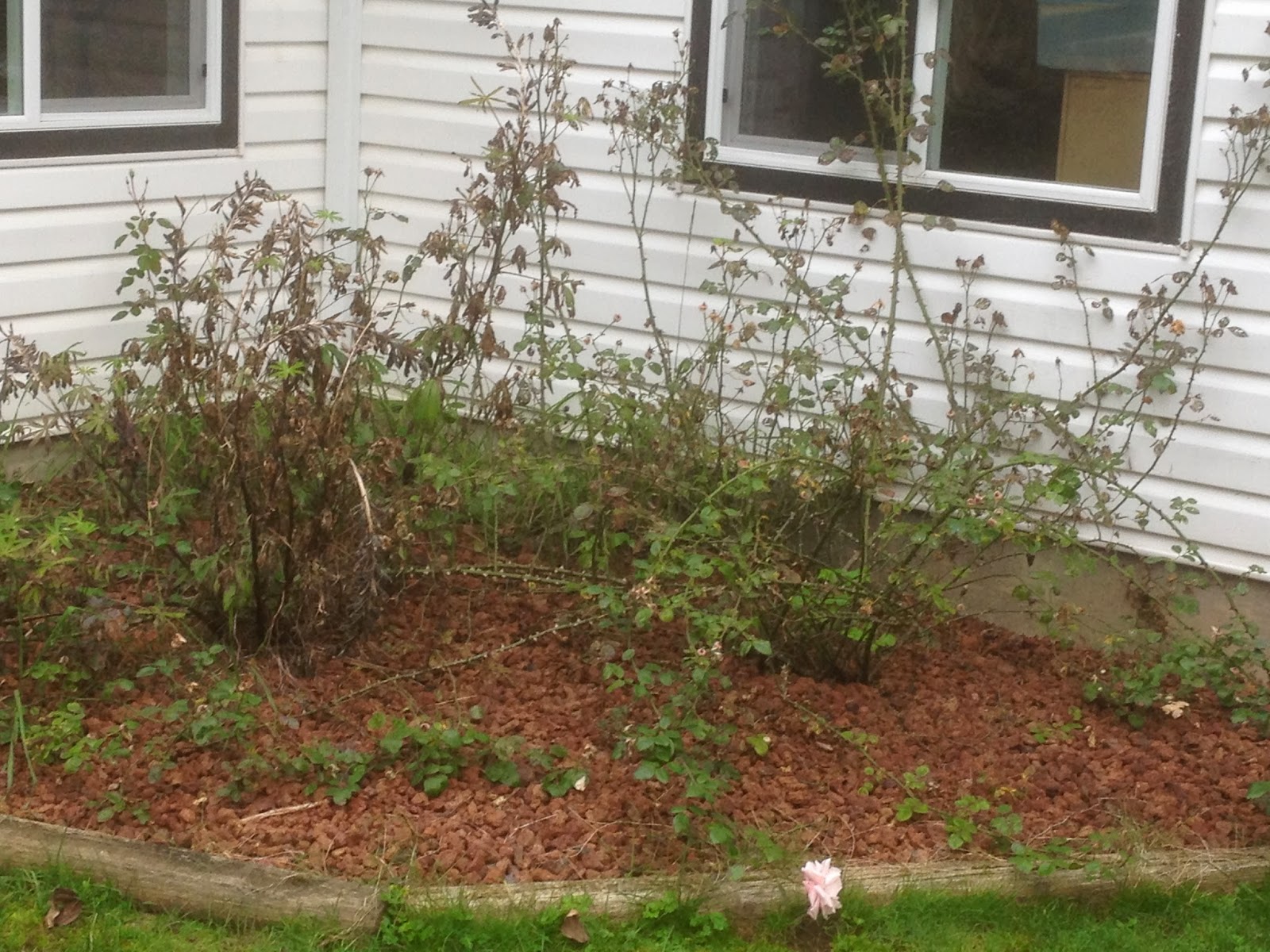 Overgrown rosebush at side of house 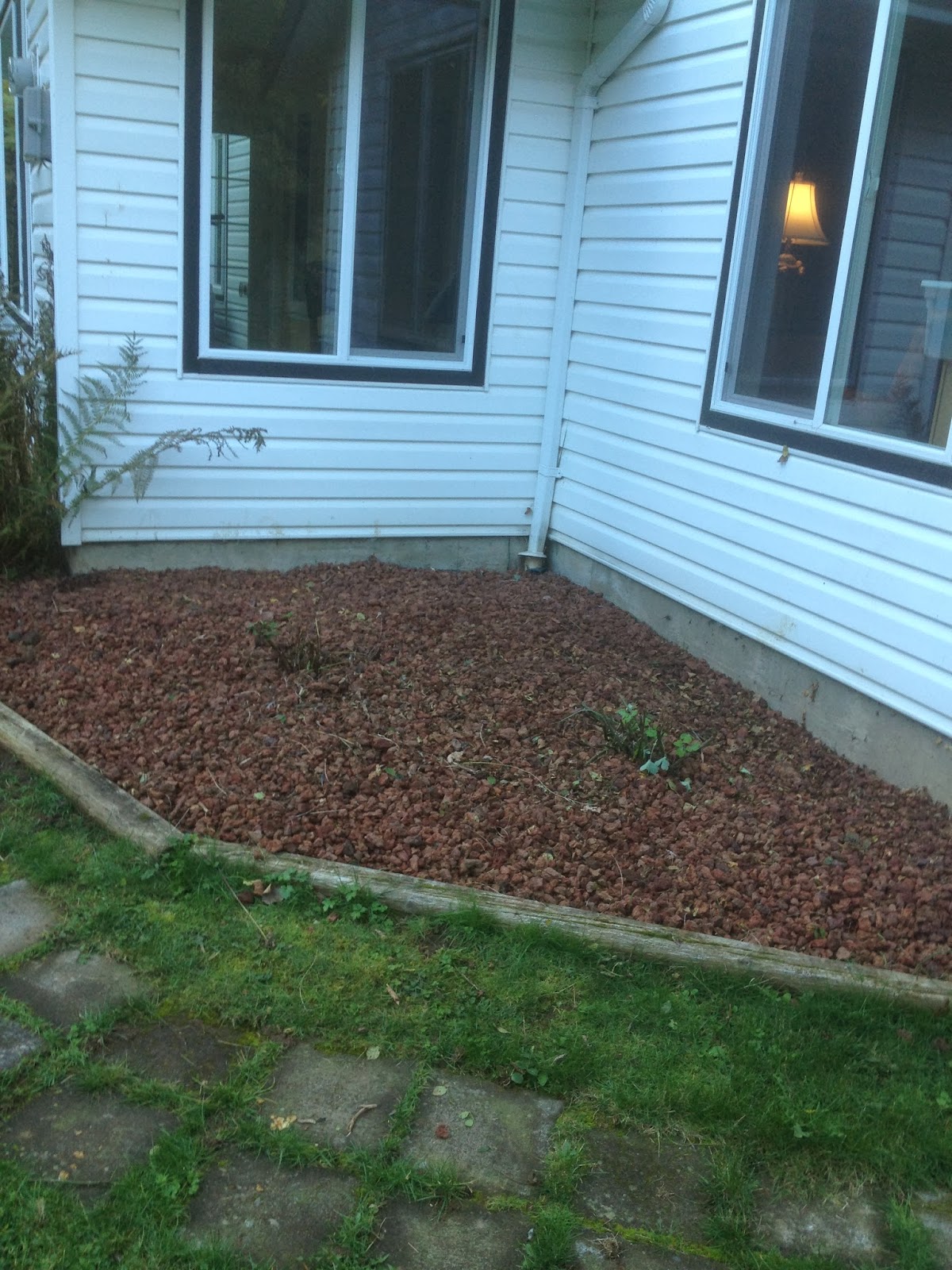 ﻿
Same garden - after
﻿
On Saturday we cleaned up more tree branches and added them to the burn pile which had accumulated since the previous weekend when we had taken down some leaning, rotting trees.  Then it was too foggy to burn, so we covered the pile with a tarp to burn later. 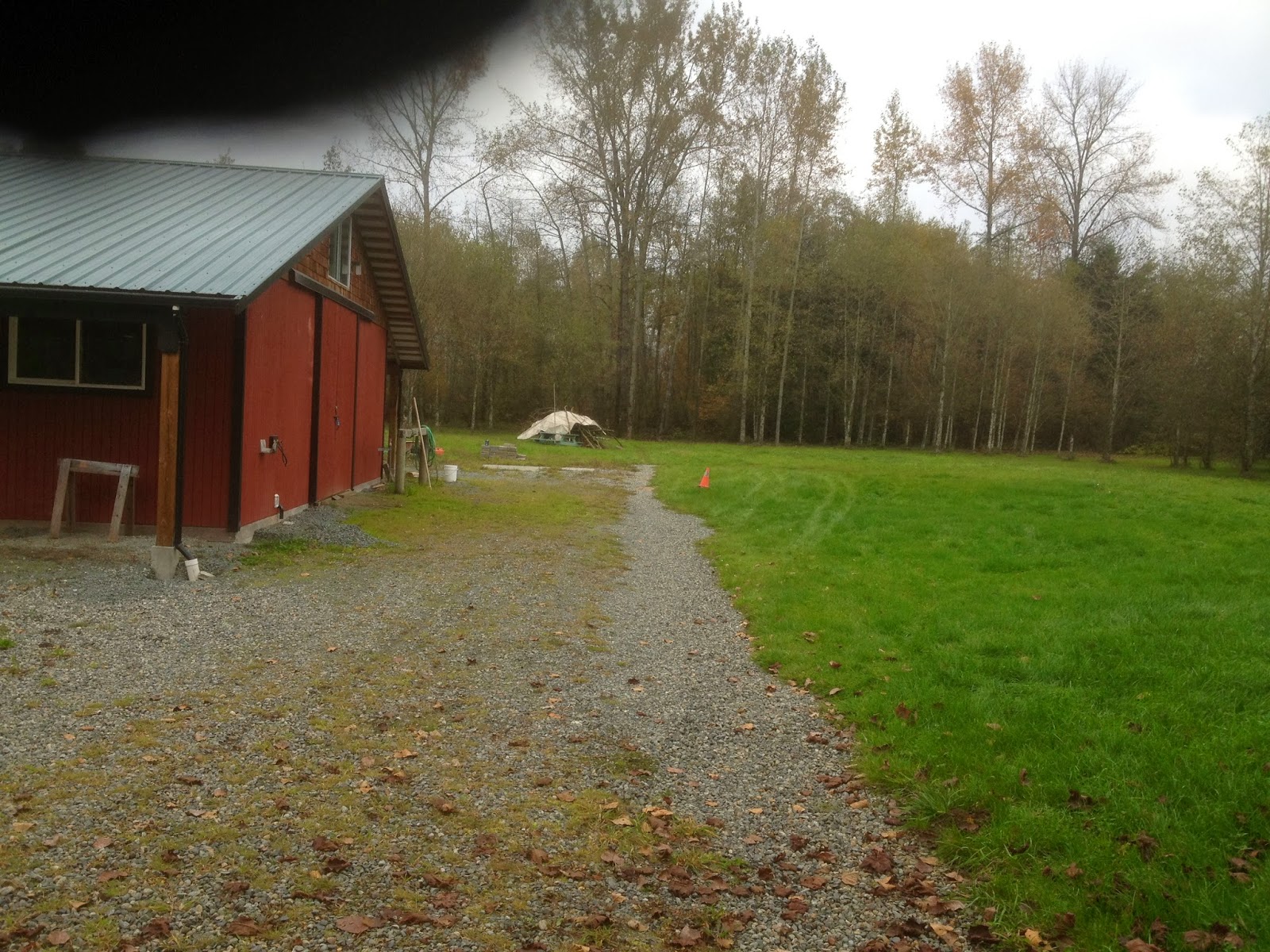 Beyond the barn is the tarp covered burn pile, hard to tell but as tall as me!
Since burning is only allowed through October, time was of the essence.  Chuckles was going away, so he mixed me up a batch of accelerant, one that would burn slowly and not cause an explosion, and left the burning up to me.  Which I was fine with until my Dad got word and advised me not to do it without Chuckles being there.   That planted the seed of doubt in my mind, and burning barns, forest fires and other worst case scenarios danced around in my head all day Saturday.  Every time I took another load to the fire pile, I stared it down like it was my opponent.  I invited older son and his step daughter Heidi to come for dinner and a bonfire.  In the end, it was absolutely fine, it was a huge roaring blaze that we monitored until bedtime, and in the morning there were just a few smoldering embers left.
Heidi spent Saturday night with Jacob and I and we carved her pumpkin and played gin rummy until late.  She and Jacob slept in Sunday morning, then we took Jacob for a walk before Heidi had to go home. 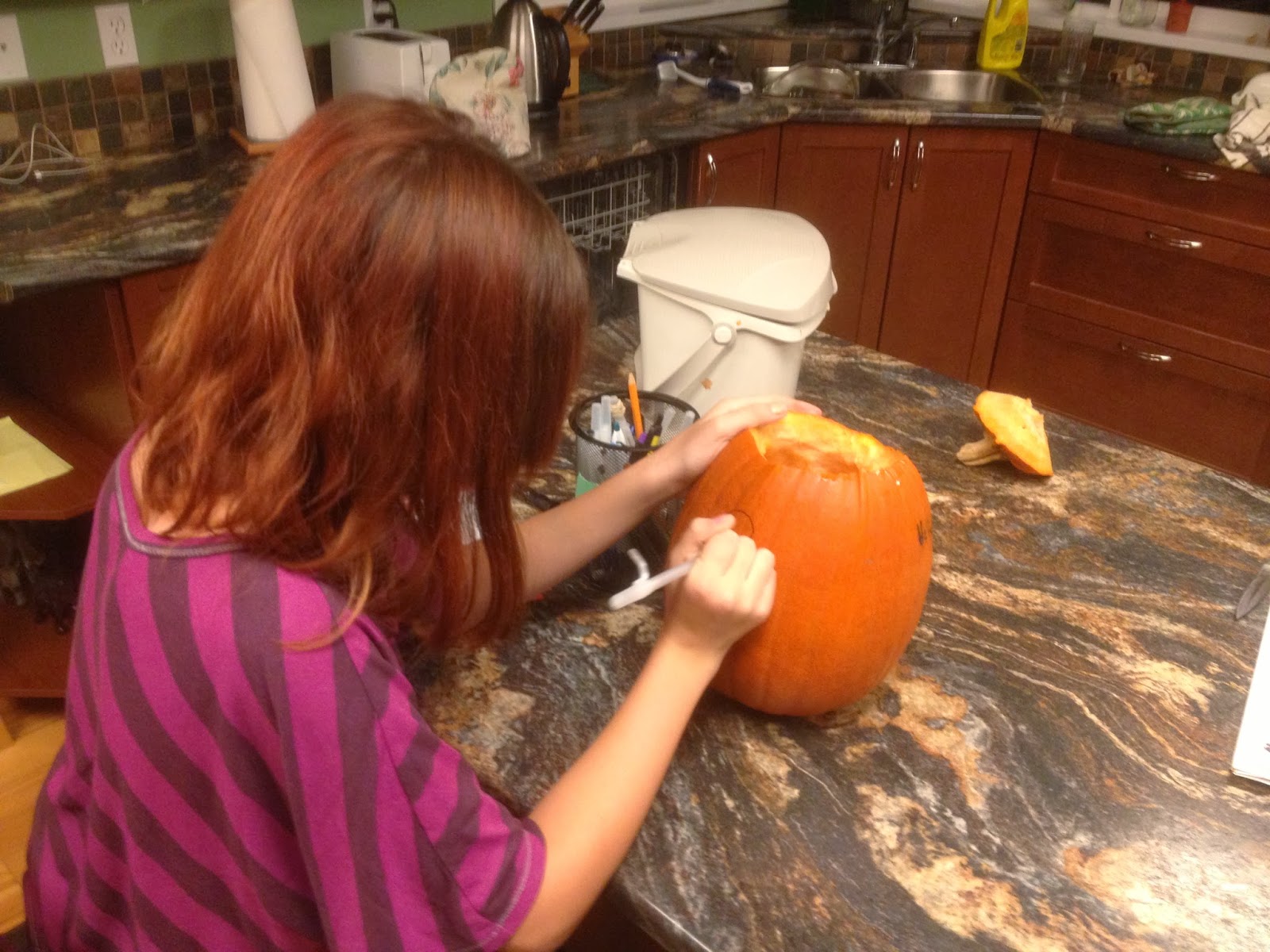 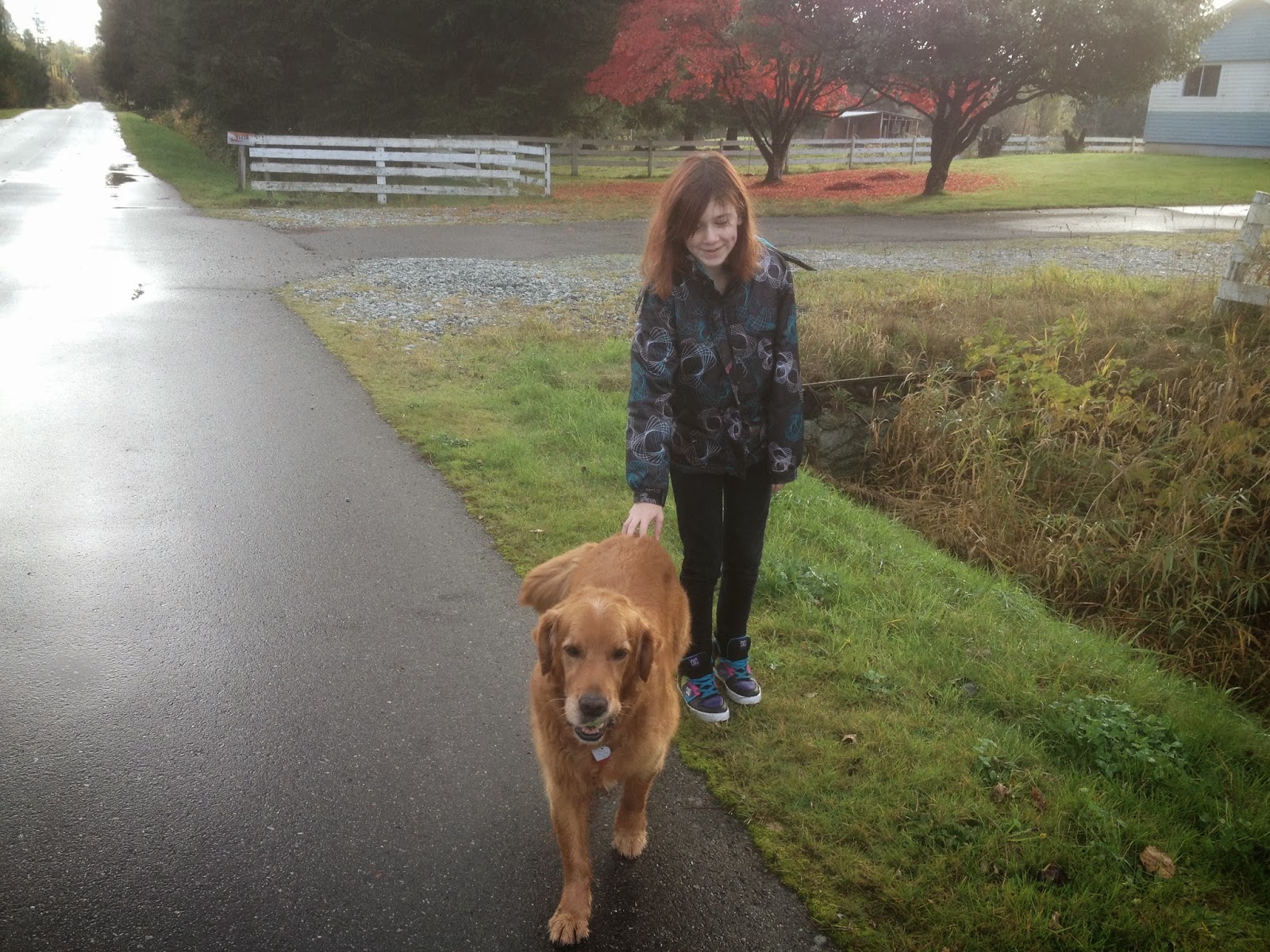 Heidi and Jacob on our Sunday morning walk
I am a plant rescuer.  At the garden center, I am the person that buys all the bedraggled, half dead specimens off the clearance table and takes them home, loves them, and brings them back to health.  We have a little azalea that Chuckles found in a pot, abandoned at the park, half brown with most of the leaves missing.  He brought it back to me.  I promised it that it was going to a better place, and took it out to the country estate.   I gave it a nice feed of well composted horse manure when I planted it, and it is positively beaming with health and happiness now, I swear!
My latest rescues are a couple of garden mums that I picked up from the nursery on Sunday.  I am in the process of resurrecting the central driveway garden at the country estate that was full of weeds and cracked and depleted soil when we moved in.  I have added a mountain of the composted horse manure to the soil, and dug it all in.  I now have over 3 dozen daffodil bulbs planted throughout, thanks to the seniors at the hall where choir practices.  In the fall they sell bags of bulbs for $2 each,  and the fewest bulbs per bag I have bought is 12.  One bag this year had about 20 small bulbs in it!  Such a bargain!  The mums are side by side near the big rock, and a I got a few pansies to add a bit of colour.  I will continue to build the garden up as I find and add larger rocks around the perimeter, but at least there is some colour in it now, and in spring it will be alive with daffodils. 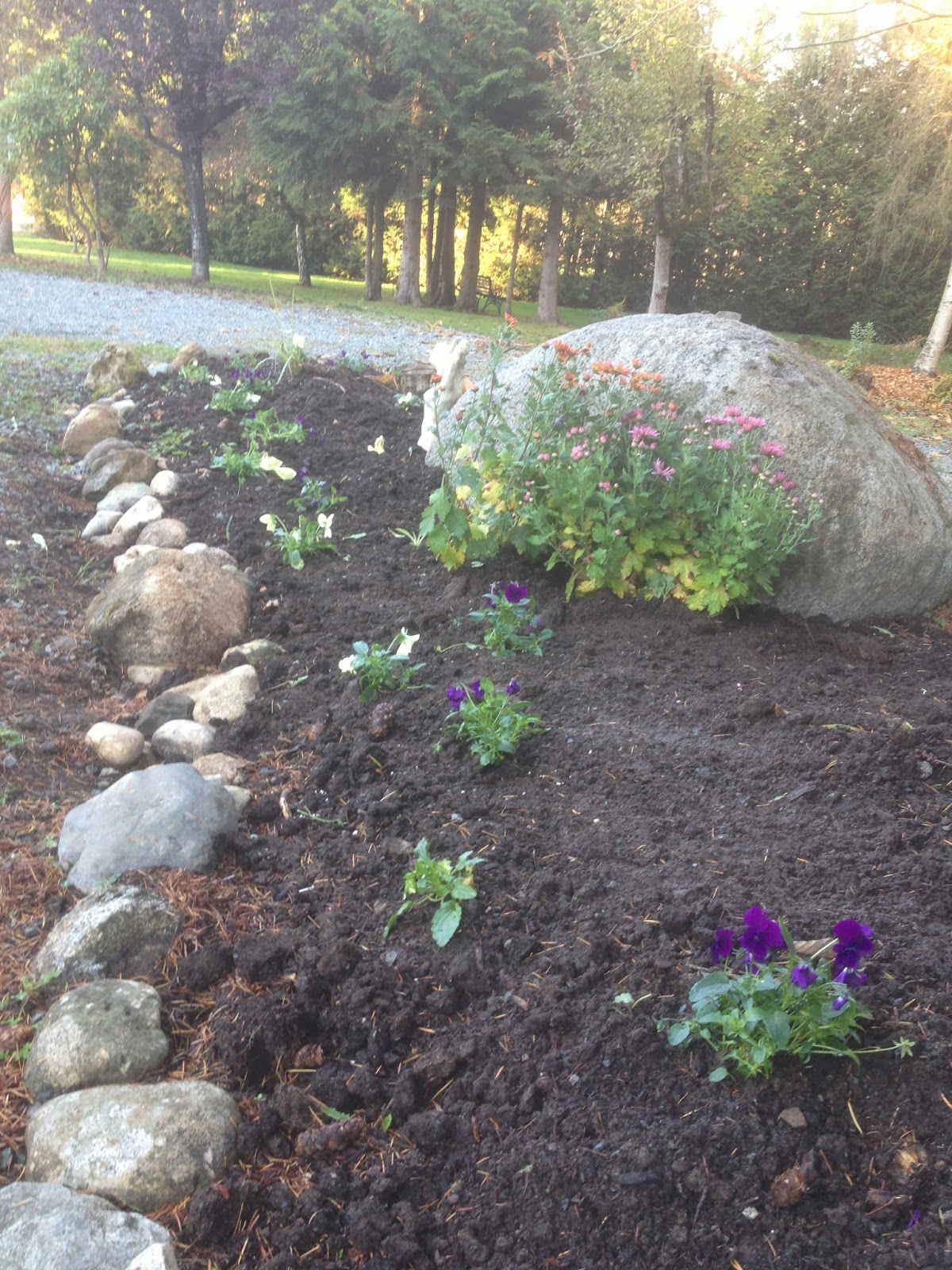 Driveway Garden with Plants
One of Chuckles buddies added a small headless plastic cross-legged girl ornament beside my naked lady statue in the driveway garden.  He put it there as a joke, but I’m leaving it.  Perhaps the two “ladies” will attract more as time goes by. 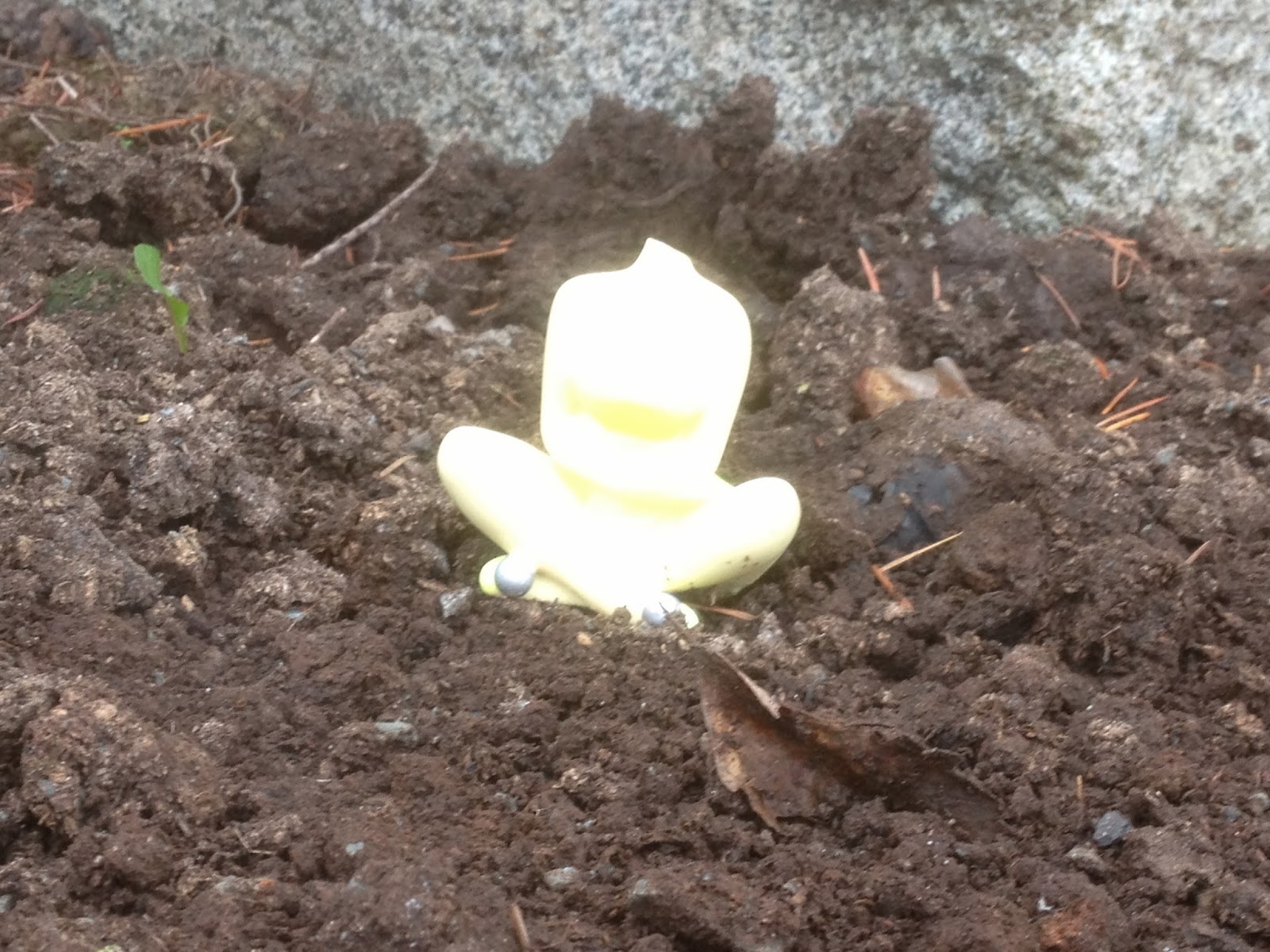 Headless Ornament added as a joke 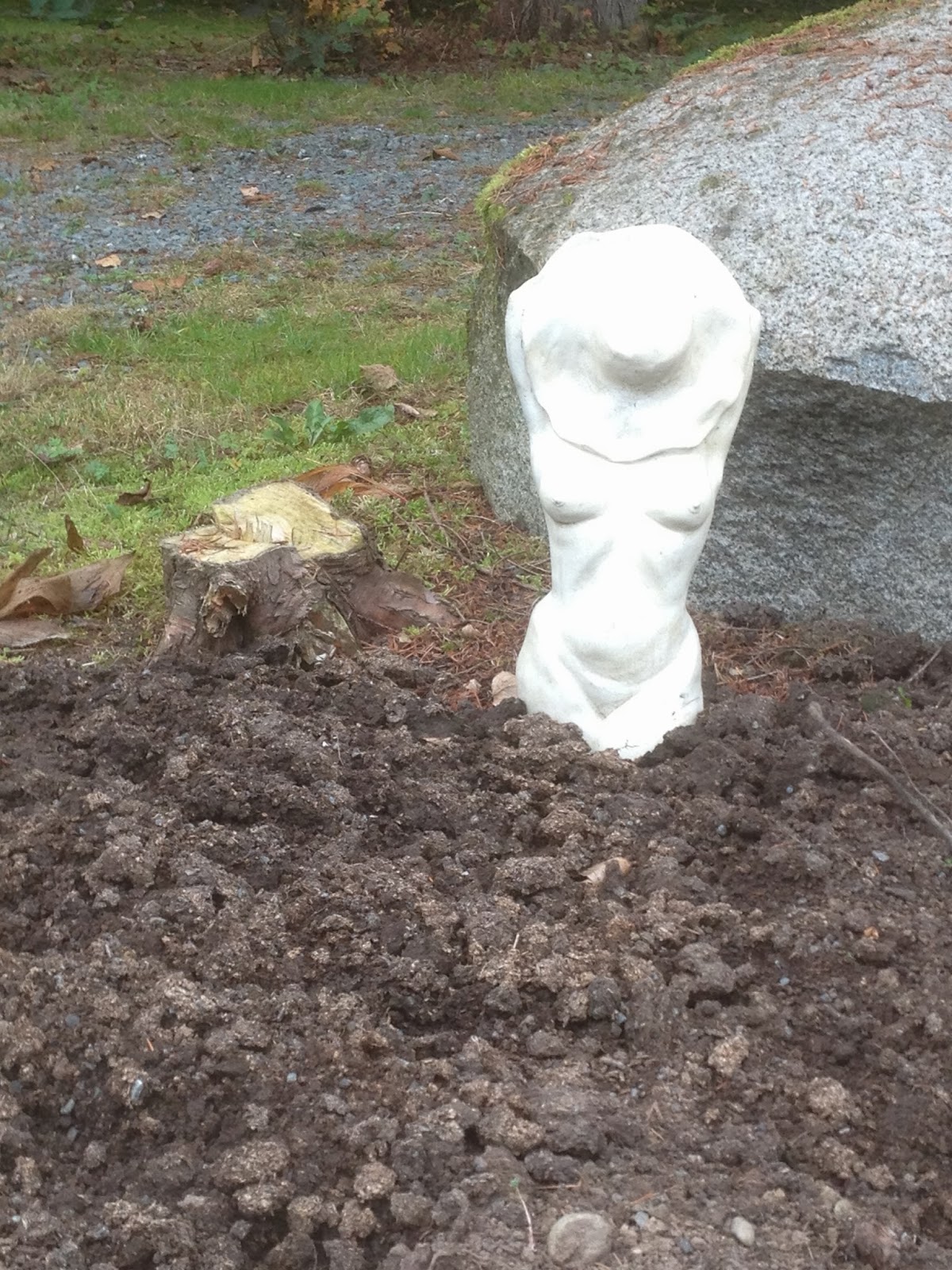 My garden statue
This coming weekend is the earnest start to the barn renovation, which is more Chuckles department than mine, I am just the cheerleader and kitchen staff for that endeavor.  If the weather is good, I hope to do more work in the garden, if it rains there is more painting to be done inside.  Needless to say, there will be something to keep me busy.  ﻿
Posted by Unknown at 14:21