Cousin Jenn was already at the country estate visiting her cousin Chuckles when I arrived, and I had completely forgotten that Lila the dog was going to be there, so I nearly jumped out of my skin when I came through the garage doorway and got barked at!  But as soon as Lila sniffed me, she remembered me from her visit to our shop a couple of weeks ago.  She is such a sweet natured dog, and like every dog who has visited us at the country estate, she loved it!

We had a simple dinner together on the patio and then Jenn and I took Lila for a walk.  We went up a side road that is a dead end, and there were some stunning places along the way.  One place really took Jenn`s fancy.  The field had many small clusters of trees, and each cluster had an assortment of items displayed beneath it representing a common theme.  One was household with a bed frame, a baby carriage, and an old chest of drawers.  Others had gnomes and things nestled at the base of the trees.  The grass between the trees was neatly mowed and it looked so fairy tale-ish!

We walked to the end of the road, and when we turned around we realized how dark it was getting!  And how there were no streetlights.  Like in the city.  Oh, oh.  The lifeguard (Jenn) and the practical mother of two (me) weren`t wearing a single reflective patch, carrying a single flashlight or in any other way prepared to be out in the dark in the country.  So much for being prepared, or safety first.  We fast walked-jogged home before complete darkness arrived!

Saturday morning we met the neighbors from across the road.  We were on our way out to get bark mulch for the garden project, and they were just preparing to put hay away in their barn.  We chatted over the fence for a few minutes.  They invited us to their annual neighborhood barbeque next Saturday night!  We have a social life in the country already! They promised to put a written invitation in our mailbox later, and true to their word, I saw them going down the street hand delivering the cute invitations they had made. Clearly, they are cow people. 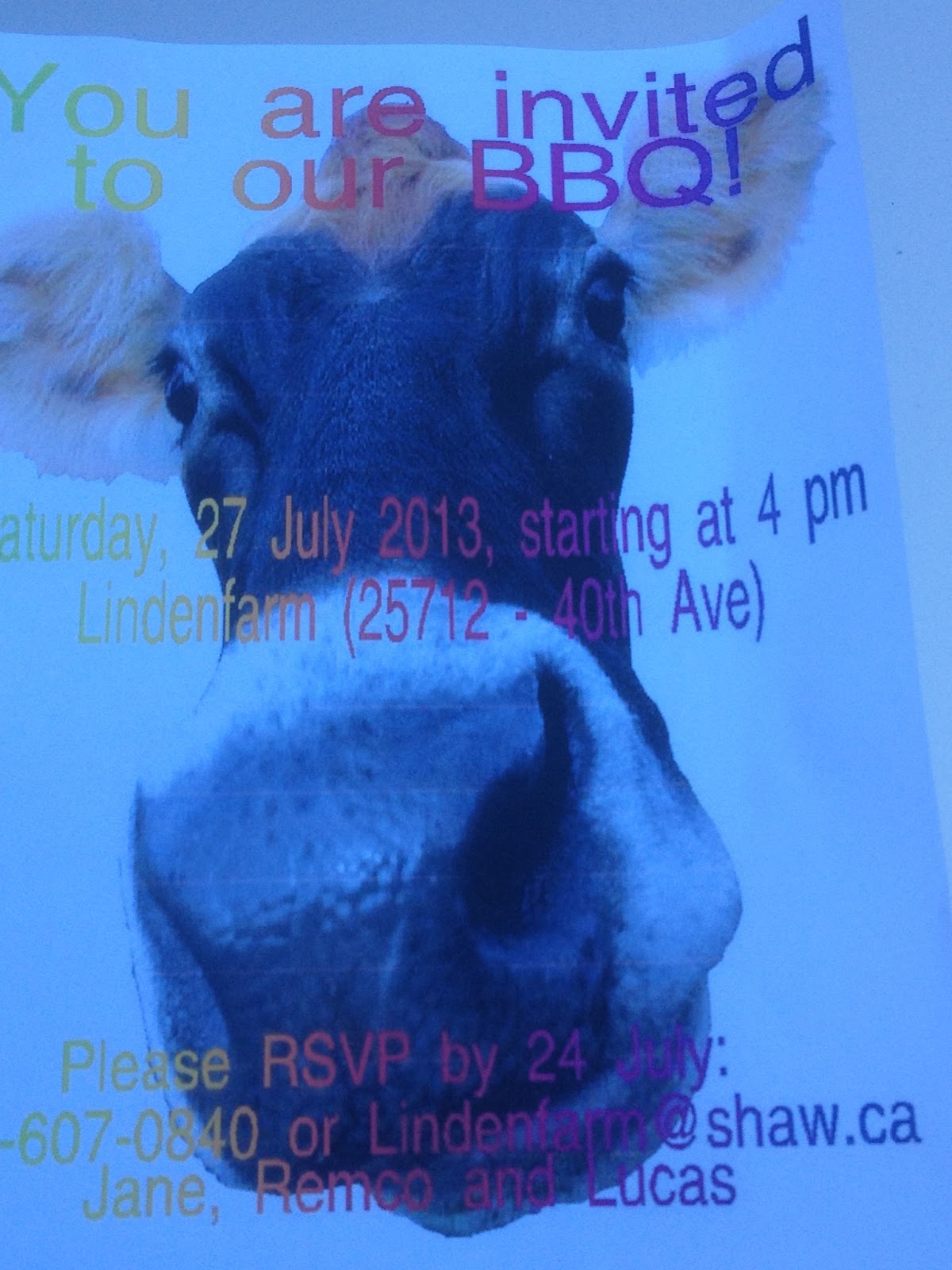 ﻿
The bark mulch we picked up was only enough to cover about about half of the area we were working on, so Jenn and I went out after spreading the first batch and picked up another (bigger) load.  Bless her big heart, she did all the shovelling and wheeling of the wheelbarrow, I just did the raking out.  We were done by 3:30 on Saturday and I had planned on this being my only project of the weekend!!
We went out and bought farm fresh blueberries and while I got most of the 20 lb we bought ready for the deep freeze, Jenn made a pie.  She is the most amazing pie maker, and without a recipe, from scratch, made the most delicious pie ever, with tender flaky pastry and lots of fat blueberries.  So we had warm pie and ice cream for dessert - a great treat after a laborious day. 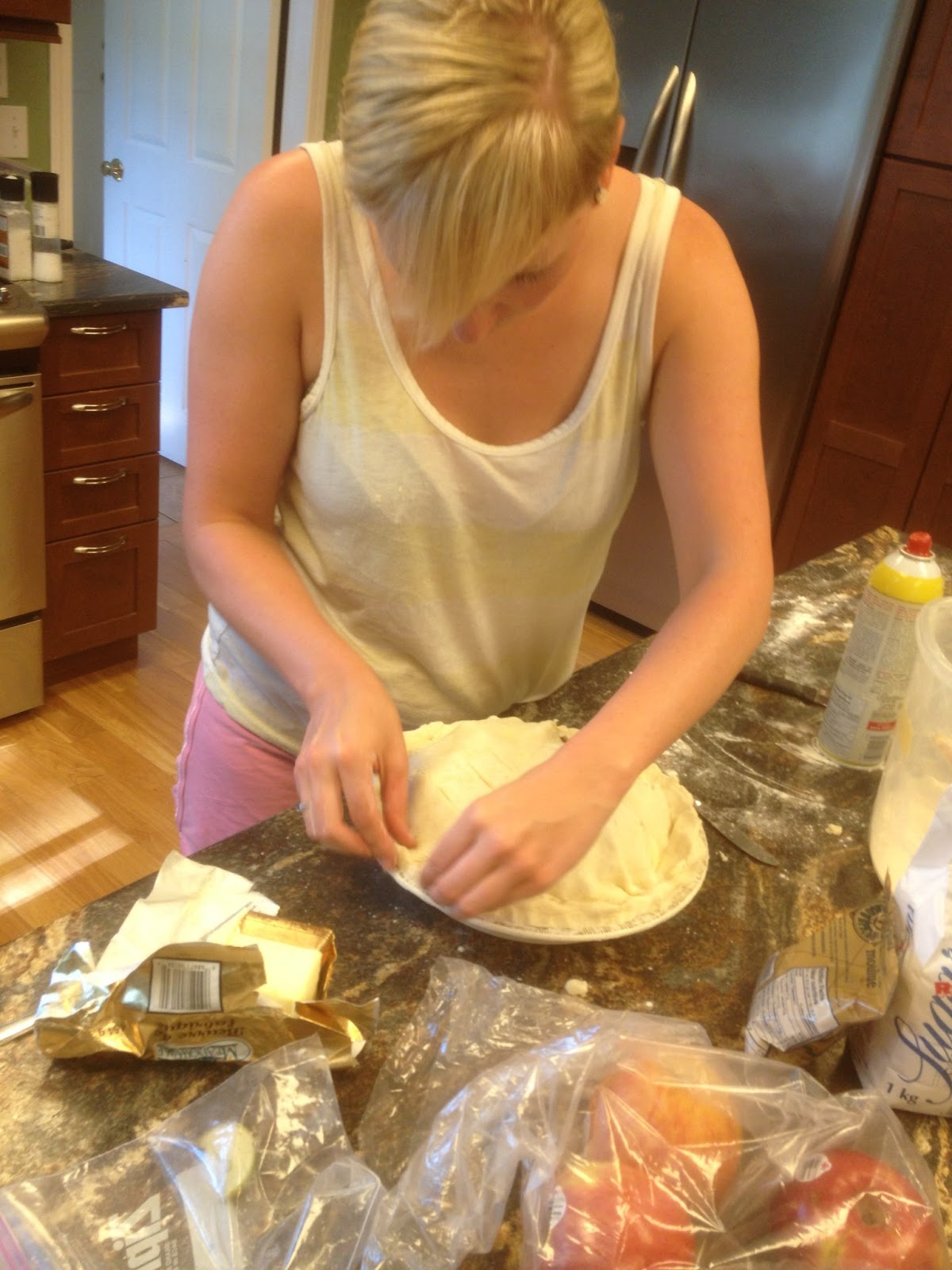 We had to improvise the rolling pin since we didn`t have one - but the spray can of Pam did the trick!
Jenn left Sunday morning after a jog with Lila and breakfast which included another piece of pie each (we didn`t have the ice cream at breakfast though!)
Posted by Unknown at 16:37