Chance Is a Fine Thing!

After lunch with a friend a couple of weeks ago I went over to the vacuum store across the street from the restaurant we met at, to get some bags for my vac.  Entering the parking lot I noticed a music store in the same plaza, so I went in after I got my vac bags.

And I came out with a new piano book.  100 of the greatest pop songs.  Easy Piano.

So much fun! And not so easy.

I bought myself a second hand keyboard a few months ago to keep in the city for practicing my choir music with.  By which I mean plunking out notes, mostly with one finger.  Thank God we have very professional learning tracks to use for most of the practice.  But I missed being able to slowly go over certain passages with my piano which lives at my house, which I don't live at, as you know.  So I got this keyboard. 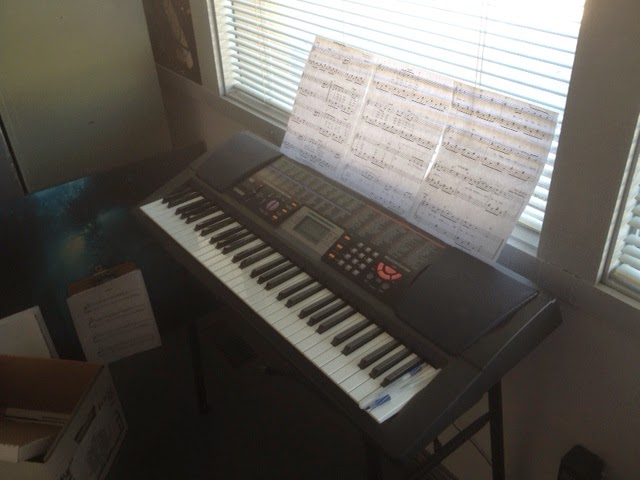 As it sits just a few feet from my desk, it has beckoned me on many occasions to come over and play.  Since the only music I had on hand at first was my choir music, I struggled along with some of the accompaniment but, let's be honest, that was way beyond my ability!

Over Christmas I downloaded some free sheet music Christmas carols and played around with them which was great.  By great, I mean it was simpler than the accompaniment, and it showed me that my brain could no longer communicate with each of my hands independently, which was a little depressing.  However, each practice showed improvement, which was encouraging.

But the new piano book has inspired me to make time for a regular piano practice, and I am really getting into it!!  I have three songs on the go, and two of them are really coming along, I just started working on the 3rd one yesterday.

Despite the fact that the keyboard has some limitations - I run out of keys playing the bass clef and the keys need a lot more weight to depress them and keep them depressed - as a learning tool it has been excellent.

Ever heard that saying " Chance would be a fine thing"?