The Veggie Garden In Review 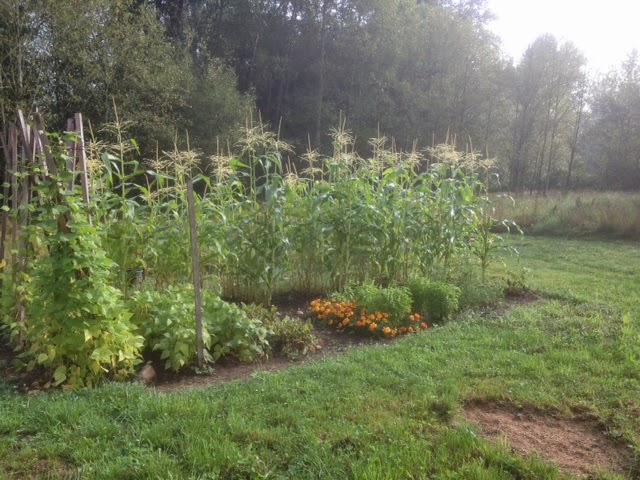 Even without the fence we planned to build, the garden thrived and
didn't get eaten by bunnies or deer.
I've been looking at the seeds I ordered and planted, and trying to make plans for what to get for next season.  Mostly I was pretty pleased with my  first effort, considering I planted quite late (May long weekend), and basically created the garden in a single day, from a corner of a former horse pasture.  ﻿


Bush Beans – Carson – yellow beans.  These were very productive at first, but flagged a little through the heat, but once the weather cooled they came on strong again and lasted well into the fall, probably the first week of October they finished.  I got about 12 ft of row from 1 25 g packet of seeds.   I would need at least twice that to preserve any as we ate all fresh except for some given away.


Pole Beans, Fortex Filet – these were great  green beans, they get really long, and are very tender.  They were very productive.    I also planted some seeds from my 2010 garden, which turned out to be a few scarlet runners, which didn’t do well at all, and then some other beans which I think may have come from the in-laws garden, which did better.  I would like to plant more of the Fortex Filet beans next year, especially if preserving any.


Beets were a dead loss.  I only planted the Cylindra which I bought because their cylindrical, uniform shape appealed to me.  However, the greens didn’t develop very well, and stayed very red and tough.  The beets themselves also were very small.  Very late in the season, as I was dismantling the garden, I dug up the rest and there were a few decent sized ones, but overall I would not say these could be defined as successful by any standard of measure.  Not sure if it was the soil composition, the late planting date or just not a seed I was happy with. 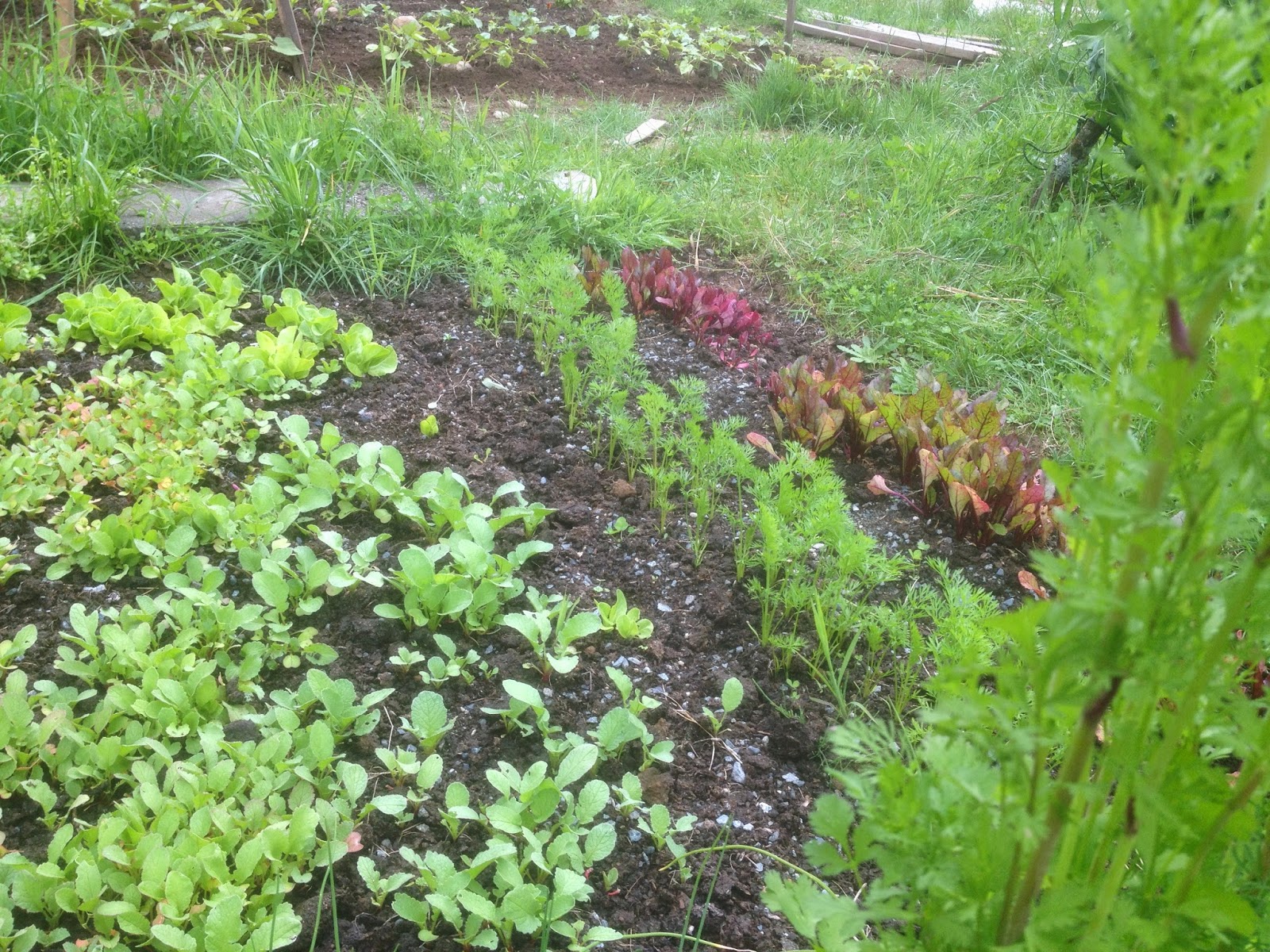 Lettuce, Carrots, Beets, Radishes, and Cilantro Bed
Carrots did well but the 2g packet of pelleted seeds I bought did not go very far.  I got a 4 ft long 4” wide swath of carrots.  I would definitely go with the pelleted seeds again, but need about 4-6 times as many. 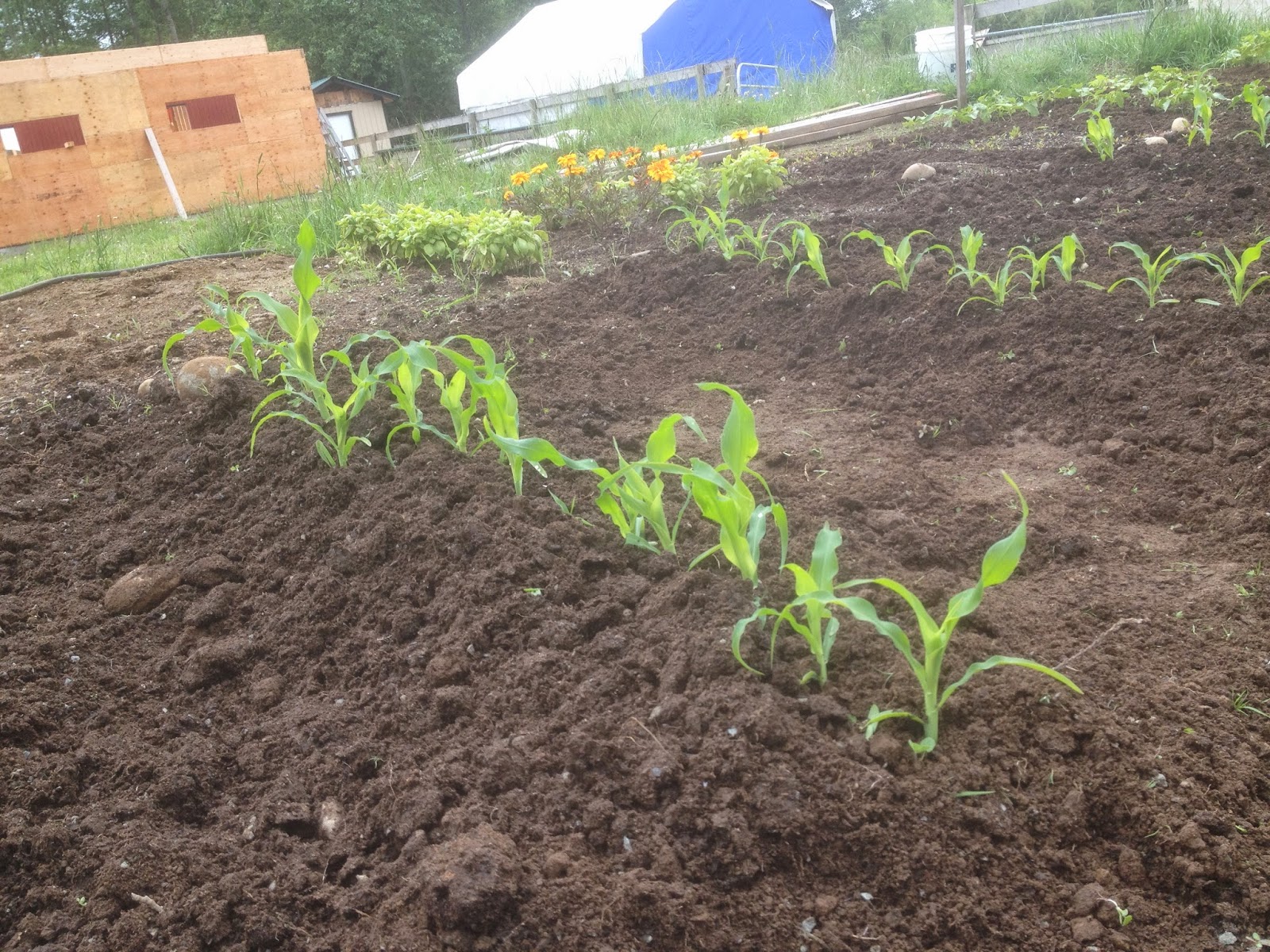 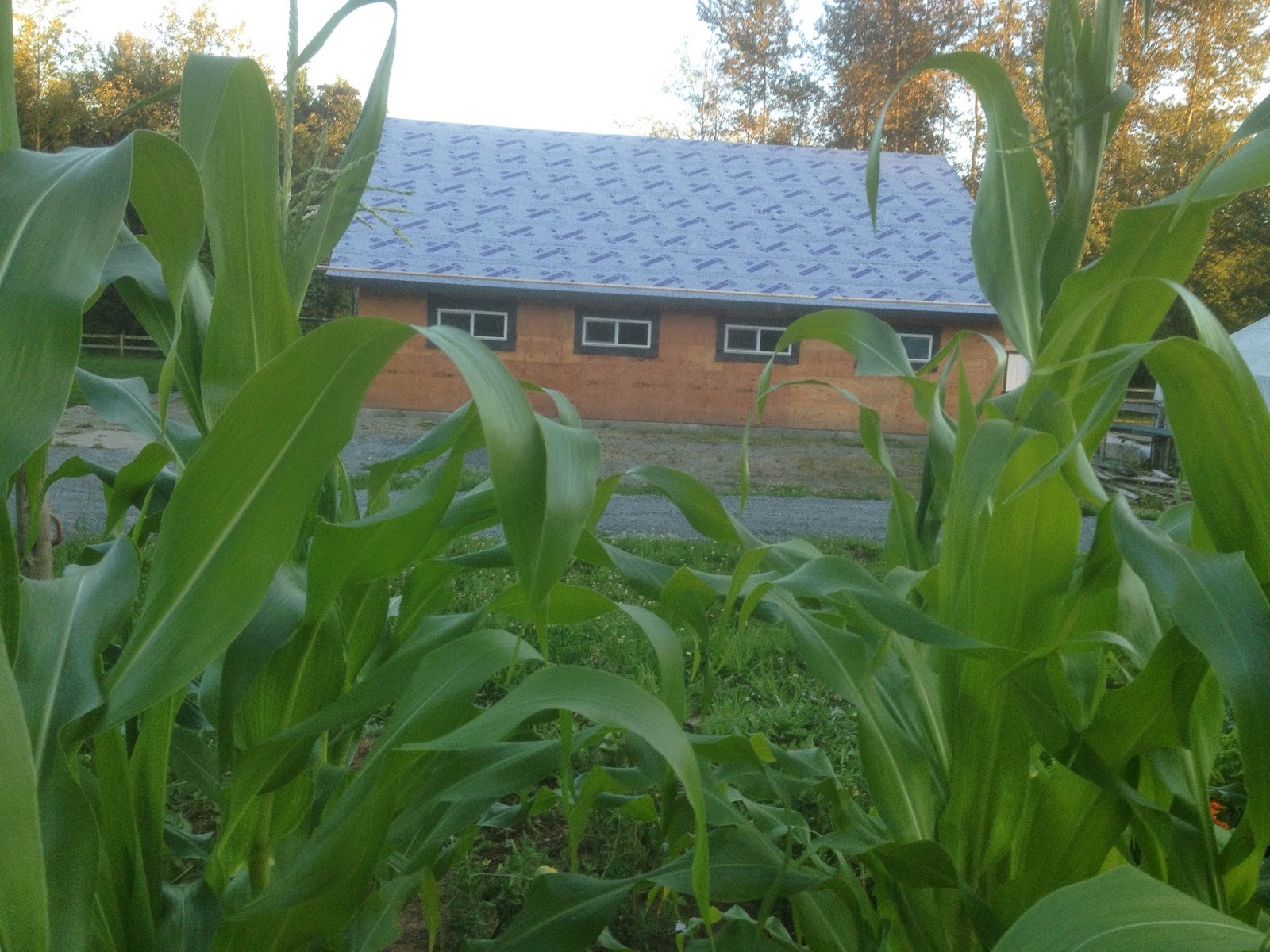 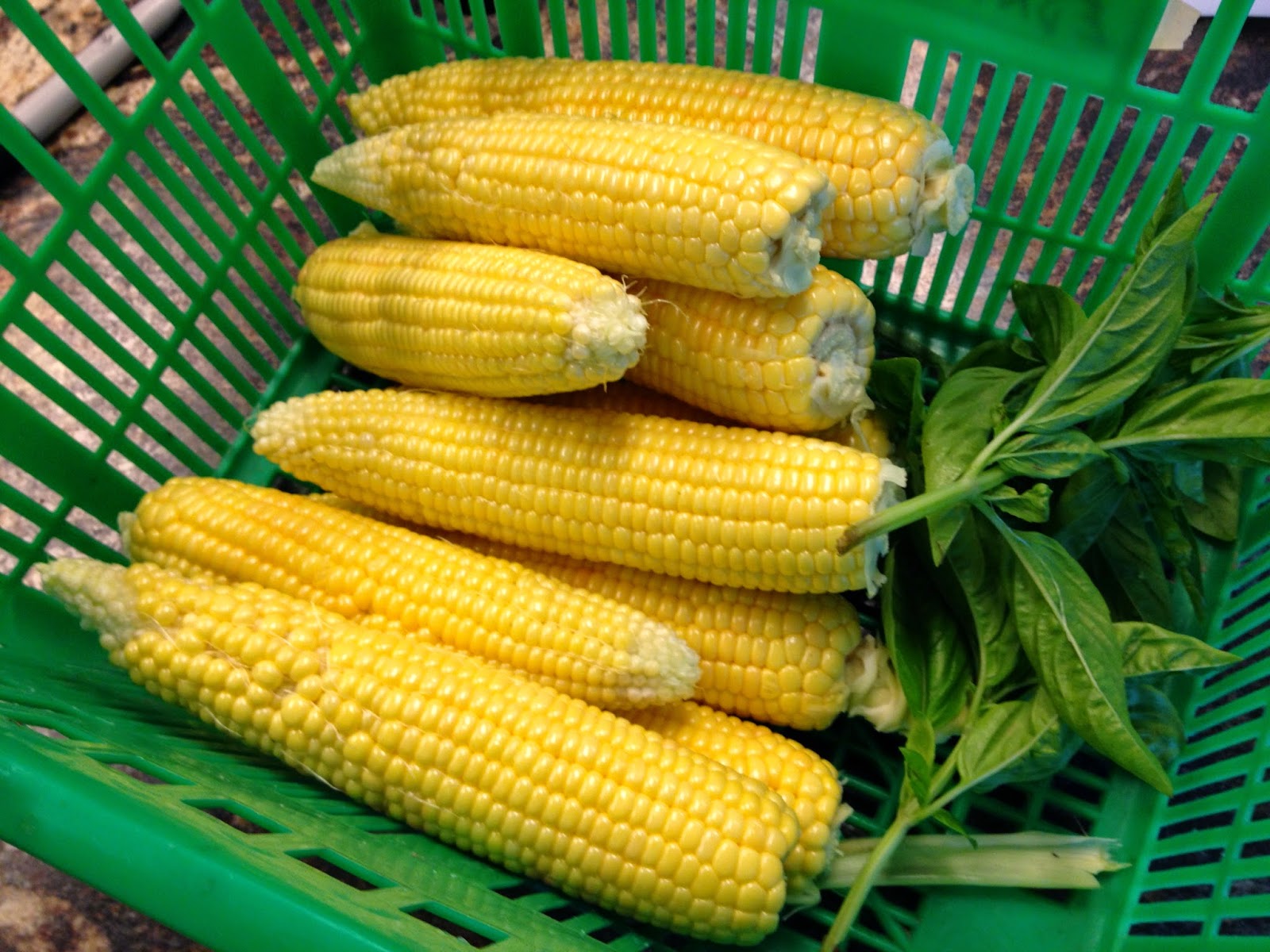 Corn Ready for the Pot!

Corn was a success!  From the 15g packet of seedsof Jubilee Super Sweet I got seven 6 ft long rows and yielded about 30-40 cobs of corn.  The first picking wasn’t very sweet, although it looked beautiful and had a nice firm texture.  Later pickings were much sweeter but the texture was mushier.  I would grow this again and plant earlier.  Probably better soil will help.


Lettuce .  I planted Buttercrunch and Coastal Star.  Both grew well in the early months, but the transplants didn’t do well once the heat of summer arrived and we weren’t there to water often enough.


Onion sets did very well, but I am not sure that the tiny onions that we yielded were worth the effort.  How do you grow larger onions?  Different kind?  Must look into. 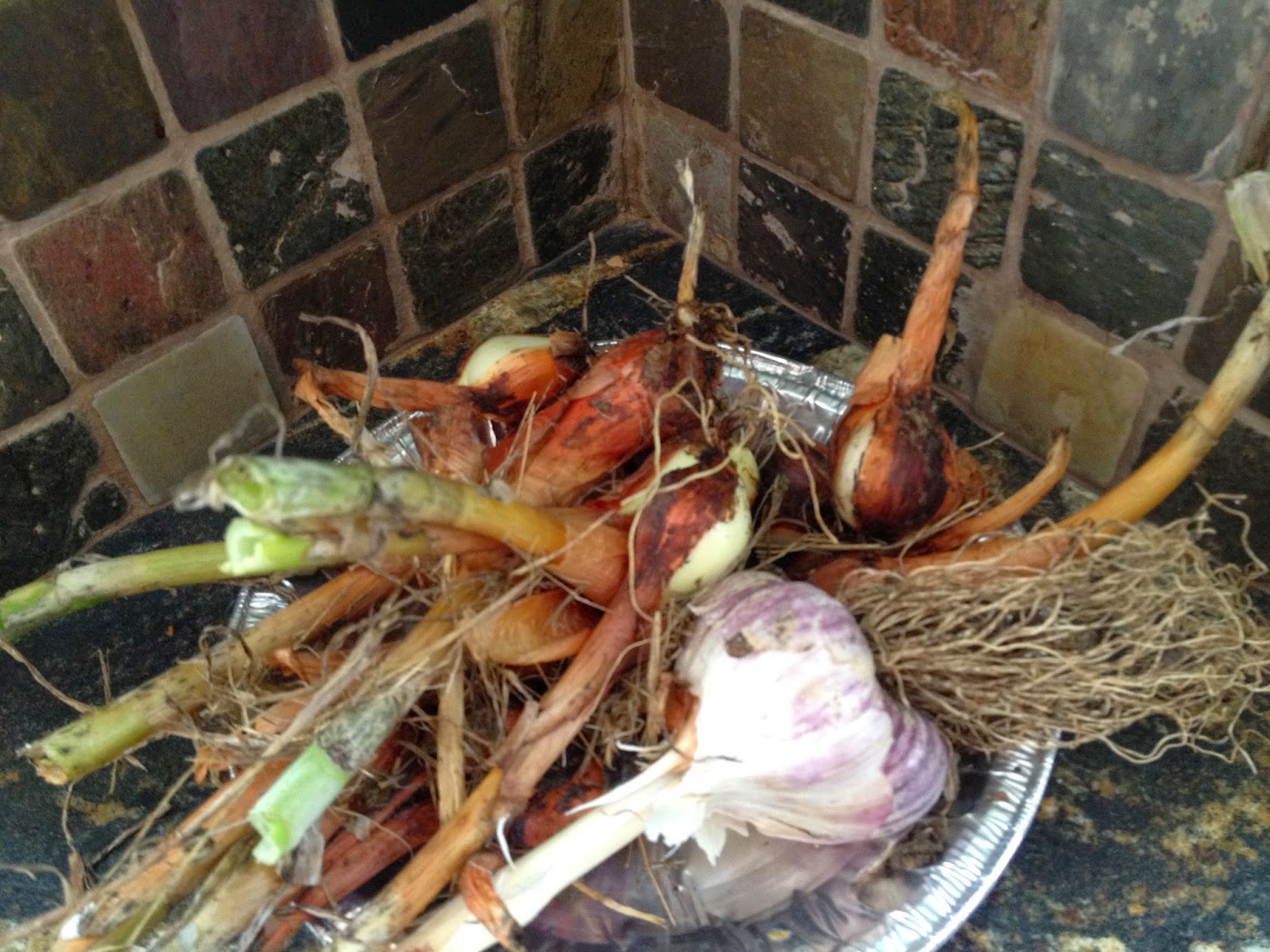 Onions and Garlic ready to use 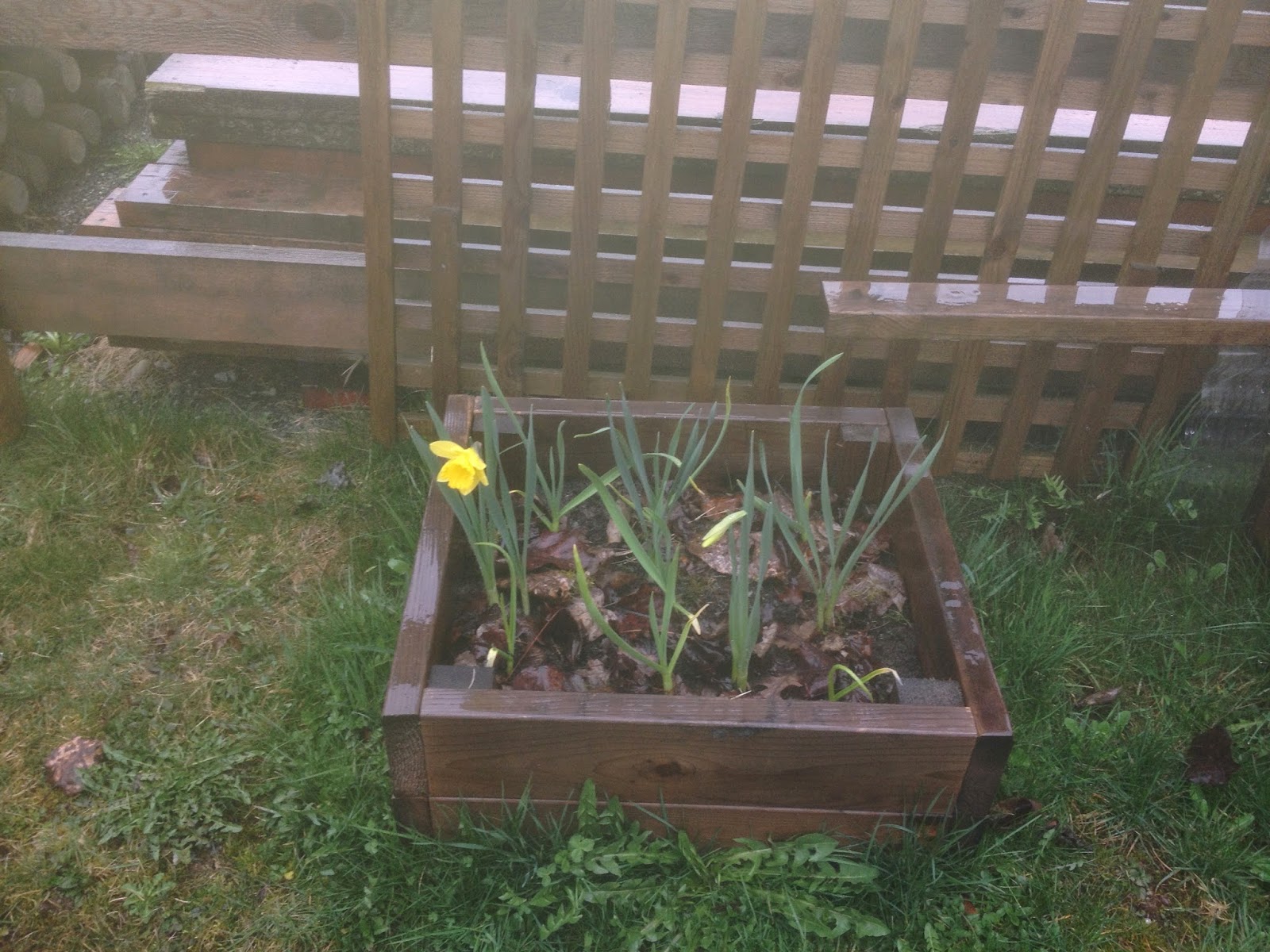 Garlic and Daffodils planted together
The garlic was fantastic.  I grew Russian Red.  We enjoyed the scapes in the spring and the bulbs we harvested were large with enormous cloves with a nice sweet garlicky flavour.  I only planted two of the small raised beds, but have already planted a much larger crop in the main garden for next years harvest.


Parsnips flopped.  None even sprouted.


Peas were great.  The 25g packet of Green Arrow peas planted about 20 ft of row in two plantings.  I planted these in the back garden and they were affected by pea moths, which I now realize is most likely to happen when you plant them later and they flower in June/July.  The peas planted in the raised bed planter from seeds from my previous garden were less affected because they were planted earlier.


Tomatoes – did very well, especially the early girls.  The romas were pretty good and the beefsteaks did the poorest, as the plants did not get very large.  Big yield. As in 100+ lbs. 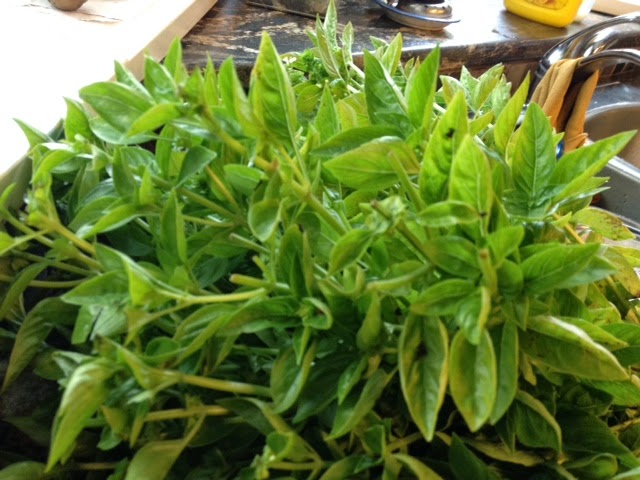 Basil crop was great.  I planted some good sized plants from a local nursery.  They really took a while to get going, so much so that I bought a tray of seedlings and put a seedling in beside each of the plants.  Once the hot weather came along it all took off.  I made two large batches of pesto, yielding about 24 meals worth, which I froze in muffin tins then transferred frozen into ziplock bags.  Each muffin sized puck is plenty for one meal for two with pasta and veggies. 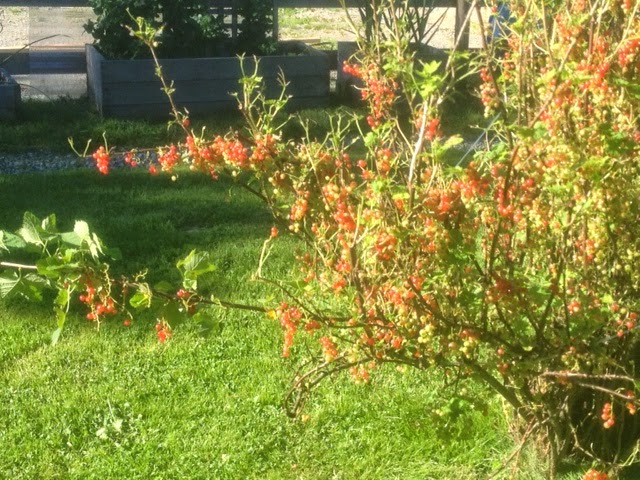 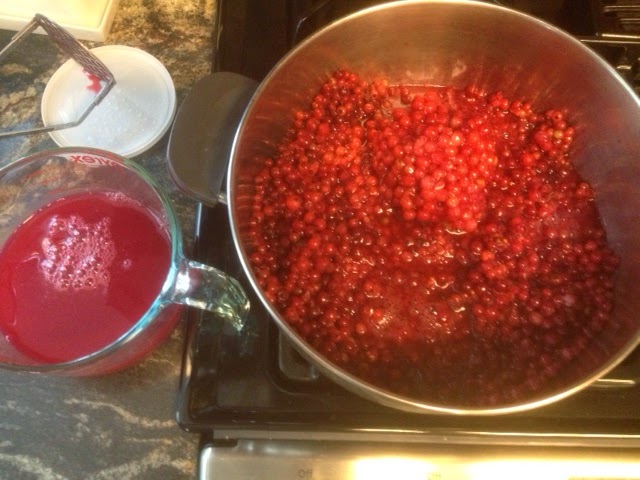 Red Currant Jelly in Progress
The red currant bush was loaded again this summer.  I used some of the frozen currants from last year along with some of this years crop to make jelly.  Then I carefully froze each successive picking in a big yogurt container which I then stupidly left out of the freezer by accident ruining all of them. So we are enjoying the jelly sparingly as it will have to last us for at least two seasons!